Find first item ( ) in list - Bug in help and manual

In the help and manual, it say : report false if no item in the list match the predicate: That's wrong... The function report an empty string (not false). 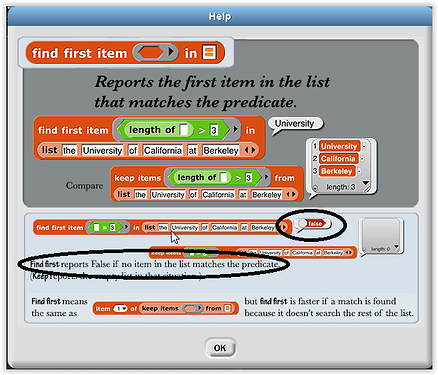 This is not ok:

By the way, i don't understand why find first return an empty string against an empty list: Depending on the case, the same function don't report the same data type: confusing... we have to trap manually the possible error in our program with an if-then-else...

Or it is a bug or a design change in Snap!

Yeah, i think it's a design change because everything is documented both in the help and in the manual

It used to report false, but when it was changed to report the empty string, Brian forgot to update it in the help screen and manual.

Brian forgot to update it in the help screen and manual.

Of course I didn't update the 6.7 manual for this, but the next next manual will have it.

As for help screens, I have given up on staying on top of those. We need help screens for the "hidden" primitives such as ≤, and I have to find out how to make help screens for cases in which the "name" of the block is actually a menu, as in the "length" block for lists. (Is is now named "of"? We have too many of those!)

I would be totally delighted if someone wanted to take over help screens. I guess we're waiting for Jens to pull Dylan's translatable-help-screen feature before putting any effort into making pngs, though. (I forget whether it's Jens or Dylan we're waiting for... they do talk to each other so I'm ignoring the issue until they tell me it's open for business.)

I would be totally delighted if someone wanted to take over help screens.

I would be interested, although for blocks that don't currently have one I might have to figure out or ask what they do. However, I'm not sure I'd want to take on adding them.

I'm not sure where I would post them, if I did take on making them.

I'm reluctant to encourage people making help screens as PNGs, because we're on the verge (right @jens and @djdolphin?) of switching to a new system designed to make the help screens translatable into other languages. Maybe we should post that library somewhere so people can start using it before we get the translation part built. Stay tuned.