The name for that last thing is "triangle number."

You say that your Fibonacci Number generator is inefficient, because it has to calculate all previous Fibonacci Numbers, just like a person would. There is actually a formula, called Binet's Formula, that gives you the nth Fibonacci Number without calculating the previous ones. The even cooler thing about that formula is that you can plug in non-integers and get very interesting results (What's the 1.5th Fibonacci number?).

because it has to calculate all previous Fibonacci Numbers, just like a person would

No, it's worse than that; it takes exponential time,because it does a lot of redundant computation. With memoization you can get it down to linear time. Still not as good as constant time, if that's what your formula takes. :~) 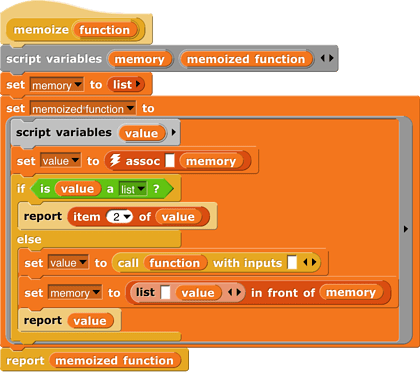 If you were to put axis on that graph, you would see that the line crosses the x-axis, where the imaginary part is 0, at what we call 'Fibonacci Numbers'.
For example, Snap! Build Your Own Blocks

i saw that project before

Yeah. I was eventually going to get around to using memoizing, but I haven't had time.