Hi!
A few days I was messing around with clones, and thought about a more straightforward solution for sending information to clones.

I made a mockup of this idea in Google Draw, so here's an image of that.

A current workaround is to use tell and new clone.

You should be able to import this by dragging it. The set block is the primitive you can find in the normal menu, and to get the "my" variables, you can follow what ego-lay said - select it in the dropdown menu.

I got this when I tried it 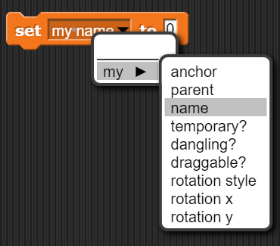 I'm confused -are you saying that @pajamaclaws21 script works for you?

It doesn't, but my solution works, well kind of. It works for regular sprites, but not for clones.

The reason just typing in the text "my name" doesn't work, is because the value that's selected from the dropdown is a special value

Special values are surrounded by brackets when you split by blocks. The only way to programmatically set the "my name" special value without manually selecting it from the menu, is by using join.

Oh, thanks! didn't know about that!

Ahhhh, I made an error in the var-set-block, one second.
EDIT: Alright, perfect. All the errors ego-lay found should be fixed now.

I don't think that works either unfortunately

On my setup, it alters the name of the sprite itself, not the clone

It was definitely an issue with my custom blocks, sadly.

Wow. Never thought of how useful that'd be.

Just a note - if you try and set something like the name at creation time, it isn't set straight away

If you test this out, you'll see that the name isn't set when the clone is started - it takes some (small) time before it is

It might be because the when I start as a clone script having higher priority than the tell script, making it run first. Of course I don't actually know this, I'm just making an educated guess, so don't take my word for it.

That was my guess.

We might have to do some experiments to say for sure. Guess time will tell.
If its true, we'll have to find another way.

You can use name,as per my example, or you can use a variable - set a sprite local var (say _default) to something like (uninitialized) and then under clone start hat, just wait for it to change like I wait for the name to change