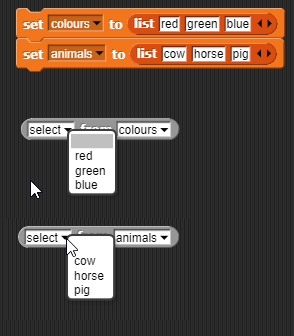 Is it possible to use a variable for dropdown options
Allow snap report blocks to define a custom drop down
cymplecy April 11, 2021, 8:57pm #2

You can also do the equivalent of writing

Love it. Thanks for sharing your inventions!

Very nice! I can use this in my Colors and Crayons library...

And it should support making hierarchical menus out of list structures, please. :~) 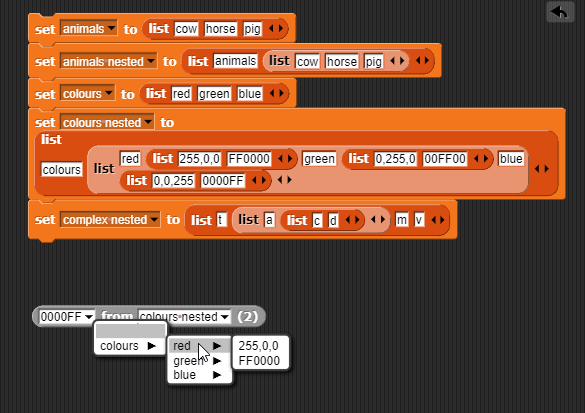 Lots of help with the JS from Jack Wearden

8 posts were split to a new topic: Custom dropdown menu support for Colors and Crayons library

So I've re-added the ability (with different syntax structure than 1st attempt) to return an alternate value from the visible menu item displayed e.g return the hex of the colour selected

and then added my own == concept when you still want to see both the menu name and the value it's going to return. Note the reporter only reports the value inside the brackets.

I've come up with an all-in-one block

Notable extra features
Adding an & in front of an item gives you a cumulative menu
e.g

Also, there is a helper block that will produce nested or cumaltive menus from a sequence of lists

is there a way to make a block that takes 3 inputs, the first one is a variable list, the second is an item number from the list, and the third is a menu from that item number of the list.

For example, I make the first input, "list". Then the second input would have a dropdown for every item number in the list. Let's say I put it to 2. Then the third input dropdown would update to the second item of the list as it's dropdown inputs.

It would really help if you can make something like that.

To help clarify what your after, can you give an example a variable list your thinking about

And why isn't the existing single cascading menu functionality not enough?

Is it that you want all 3 items returning and not just the final one?

The variable called "1" would be

and the variable called "2" would be

I did also re-think a bit, so my first description doesn't match this.

I did also re-think a bit, so my first description doesn't match this.

No problem
Does it have to be 3 separate dropdowns?
What I'm thinking is would you be happy to just have this 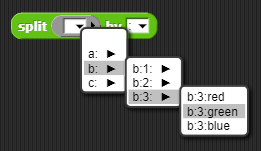