the algorithm is simple - slice the input into 3-letter (T,C or G) triplets then translate each triplet to an amino acid (one of 20). for example TTT has a value of 1 and points to the 1st entry in the table of amino acids,which has a value of F (the one letter code for phenylalanine) while GGG stands for 64, which points to the last entry, G, which means glycine.

Can you explain this? I don't know much about biology

this is called the "codon wheel" - from which i based my notation. if you start from the center and read outwards to the 12 o'clock position, you will see TTT (in red) translates to F (see below for legend). if you go in a clockwise direction, the next triplet is TTC, which also translates to F - after that, the triple is TTA which translates to L, then after that, the triplet is TTG, which also translates to L. this is numbering scheme i followed such that TTT, TTC, TTA, TTG are numbers 1,2,3,4, etc. and the last one (before the midnight position) GGG s number 64. 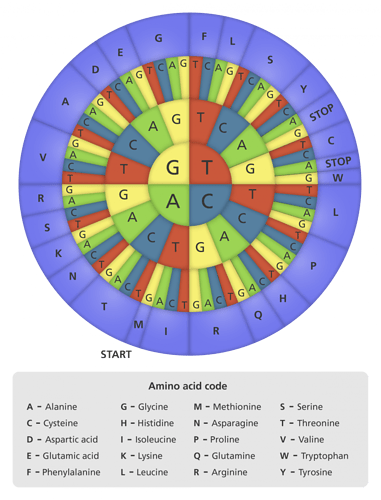 and here's the article that goes with the above. 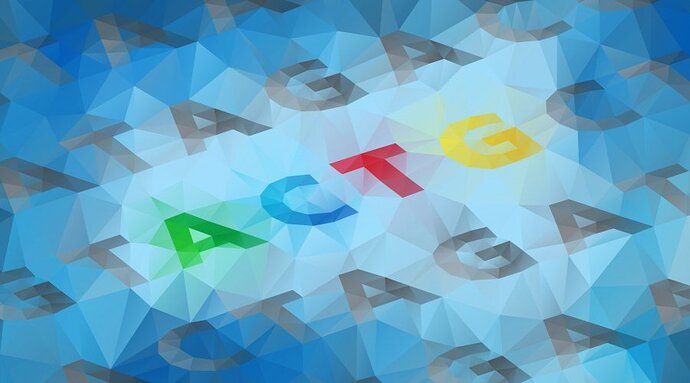 What does DNA do?

The DNA code contains instructions needed to make the proteins and molecules essential for our growth, development and health.

(just remember that i used the same notation for the bases - namely TCAG - while other documents and tables use another notation, as in the next article).

you should read this article to give you a visual view of the process. it's very fascinating.

(just remember that where the article points to U, i had used T in my program).
i don't know any biology - i was just fascinated by the translation process.

uracil which doesn't exist in dna

i just learned that dna sequences generally start with ATG (translated to M) and they end in TAA, TAG or TGA (which translates to a *, which means stop), then protein synthesis stops.