When there's a quiet moment

could I ask for a disable blocks feature (like Blockly has) please?

can you explain a little bit more in detail what exactly you'd like to disable? tnx 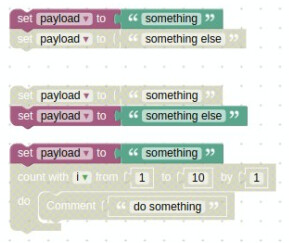 is it the same as commenting out?

There is a similar feature on AppInventor as well. Blocks can be disabled and they do not get executed in the sequence. It is a very helpful feature for debugging.

Pulling blocks out of a group with extract is very error prone. Long c-blocks make it hard to figure out at what point the extracted sequence was located.

hmm..... I'm not convinced, because you still need to click on every script to change its state, same as exctracting a block and placing it besides the script. Also, it would introduce state to blocks, i.e. yet another color / scheme, increasing cognitive load and introducing yet more aspects a teacher needs to check when a kid comes to them saying "my project doesn't work".

Plus, you can make your own C-shaped "ignore" block and simply wrap it around the parts of a script you wish to disable.

The is a huge difference bw disabling a block in place and inserting an ignore c-block to wrap other blocks. The point of disable is that the block structure is not affected, only the execution selection of certain selected blocks. The key point is that one does not mess with the order of blocks.

Less prone to error and more easily corrected than extracting

I find it quite useful in Blockly and have wanted this for sometime in Snap!

As to the point about new state and colors etc, and hardship for the teacher: it is easier to read a script with disabled blocks in place but greyed out. Because the logic still can be followed. When blocks are removed and placed aside, the code is no longer the same and logic flow has changed. So a teacher could much easily follow a potential change if blocks in place were greyed out than removed and placed aside.

There is also a huge exploratory aspect to the whole idea: when playing with a new script from someone else, one can simply change a block to disable / ignore mode, and see how it affects the result.
Being able to do it without removing blocks / inserting blocks and affecting the flow is very helpful in the discovery process .

I don't think this proposal is bad... but I have some comments:

dunno about the benefits, really. Disabling only makes sense for statements (command blocks) and not for expressions (reporters), because you'll want to return a constant instead. So, this feature would emphasize imperative computing even more.

I agree about the emphasis on sequential programming.

I think the "color mark" is not possible... because the new category features.

What about "dark fading", instead? No new colors, just darkened/faded ones, if a portion of code is disabled?

It would be very useful in my recent project to disable portion of code (that doesn't do what my intention was).

See a mock-up in the image below. 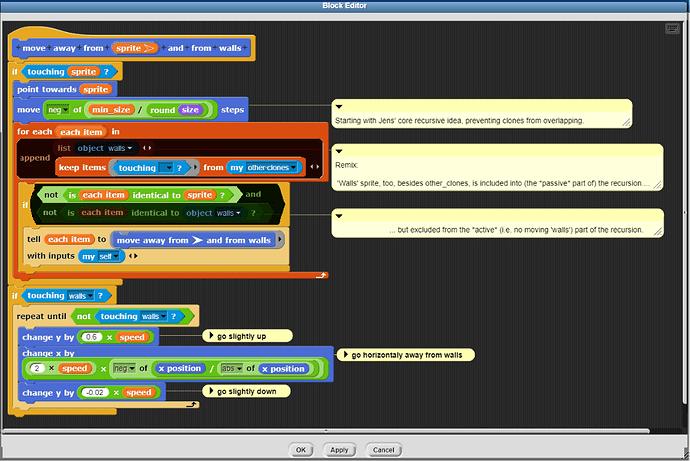 How would this work with people who use fully transparent blocks?

I think colors are the least of your worries. How is the user going to set this up? Select a reporter to disable, and then select some piece of it as its replacement? What if the replacement isn't a piece of it, but rather a constant value? As Jens said early in this discussion, the idea is much more applicable to commands than to reporters.