Is it possible to limit framerate?? I'm making a Flappy Bird clone and my game is having significant slowdowns and lag. How do i fix the lag, and limit the framerate??

Well, we can't really help fix the lag if we don't know what to fix. It would be nice if you could share the project.

snap limits framerate to 67, and in most cases browsers limit it to 60. there's no reason you would need a framerate limit on a flappy bird project and you shouldn't be having any lag. limiting framerate isn't a good solution to lag anyways

Why 67, exactly? Is there any reason?

Here it is! The issue is when i draw the text in front. If i just print out the text, it appears behind the pipes. The way i put it in front now causes lag constantly.

Ah, sorry. Still working on the game; i will share it in a moment.

I think that limiting the FPS to 30 would give a more stable framerate, because there's more time to process therefore less lag drops. It would also be nice if i could run everything at the same speed. not dependant of FPS.

Limiting the fps to 30 won't do anything about reducing lag, in fact, it would probably lag even more. The issue is not the fps at all, instead something in your code.

This script in sprite (2) (the pipes) 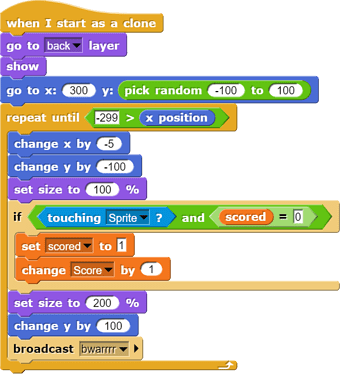 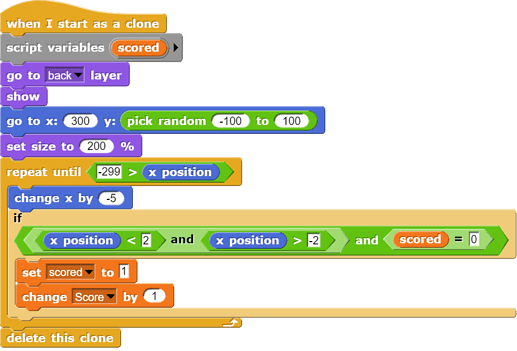 Moving the sprite up and down, then checking if the player (sprite) is touching, is actually not necessary, since the player never moves left and right. You only need to check if the pipe is in the center of the screen (you can't be sure if the x position will be exactly 0, so I used < and > to check whether it's in the range).

As for the delete this clone block, I added that, because the clone is not deleted when the script ends, so the amount of clones will always increase, which can add a lot more lag.

Since the scored variable is now a script variable, you no longer need the scored sprite variable, so this script 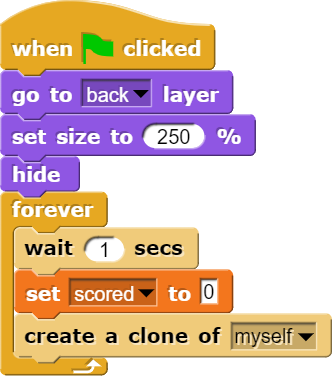 can now be this 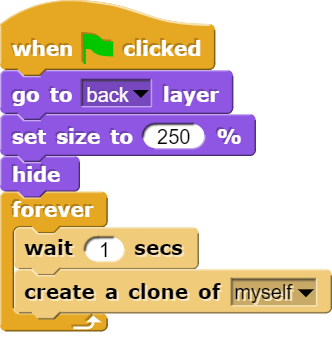 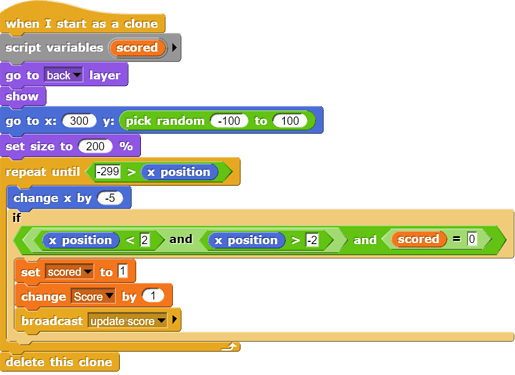 and in the score display sprite (sprite (3)), do this 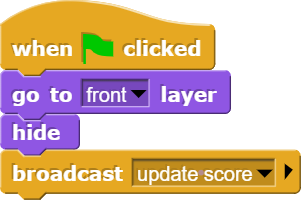 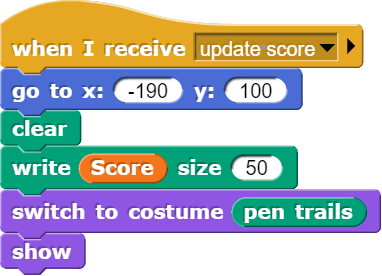 Here's the project: Snap! Build Your Own Blocks

My improvements actually made it run with no lag at all.

yes, you can hide lag spikes under a smooth consistent layer of lag. that's not really solving the problem though, it's the kind of thing you should apply carefully and as a last resort, and certainly shouldn't be done for a project this simple or even close to it.

there's a few issues you have:

note that when using broadcasts, every clone recieves the broadcast too. it's good to only broadcast to a specific sprite when you can.

most performance issues i know of in snap generally come from pen usage and many loops, and snap doesn't have great performance for a lot of things games tend to do. try to avoid running code as much as possible. snap has a very high clone limit, it might be more efficient to use clones instead of pen where possible, but i haven't tested that yet.

writing text with the pen is very slow, you should only do it when the score actually changes. i'd reccomend a broadcast that sends the current score to the score sprite

That's not entirely true. I've used pen in many of my projects to write text in a sprite every frame, and have not run into a performance hit.

multiple forever loops are pretty slow, again it's best to use one loop and broadcast to sprites since this also lets you control script order

note that when using broadcasts, every clone recieves the broadcast too. it's good to only broadcast to a specific sprite when you can.

It's not necessary when only one sprite receives it. There's not a huge performance difference when sending it directly to the sprite vs sending it like normal. The option was was added so if multiple sprites receive the same broadcast, you can send it to only one of the sprites.

Actually, that's slower. Writing a text engine in snap is really slow, since it uses a lot of code. Using the primitive write block is the easiest and fastest.

Oops. I was using the "bwarr" broadcast to just test. Thanks for the recommendations, @ego-lay_atman-bay and @sarpnt !!! My game is pretty much lagless now and i learned a lot more about Snap!