I don't think it is a bug, but I wanted to report it anyway:

SNAP beta version initially was running in my WIN10 HomeEd Chrome Version 83.0.4103.61 system without any delays when switching between tabs. However, as of yesterday, I am back to the 5- 10 sec delay when switching.

huh, must be some changes to Chromium, because for sure Snap! didn't change the architecture again.

You think there's someone at Google whose job is to keep sabotaging Snap!? Maybe someone in the Blockly department.

Maybe someone at Microsoft. Ever since they started "contributing" to Chromium it's gotten worse. I bet their secret plan is revenge for killing IE.

No seriously, last week Microsoft started rolling out the new Edge automatically to all users, previously you had to download it and install it yourself. So, there's a good chance some more things changed. But my guess is that - as with all Windows computers - you'll have to re-boot it once per week.

Just did a quick comparison bw Chrome and Edge:
EDGE tab switch is consistently 3 secs.
I guess you might be right about MS revenge !!!

Another observation:
I could not exactly tell what duration I was away from Chrome browser, but when I got back and selected the SNAP! tab, the screen opened up totally empty. Then after waiting ~20secs the blocks filled in and I could run the program.
This does not happen if the switch is relatively back to back between tabs.
I'll try to ascertain the delay more accurately.

huh, must be some changes to Chromium, because for sure Snap! didn't change the architecture again.

As I have told you before in the 6.0 beta thread, this has been happening to me since the last two weeks.

someone's breaking Chrome faster than we can fix it.

And a question- can't you look at latest Chromium updates to get an estimation of what might be causing this trouble?

can't you look at latest Chromium updates to get an estimation of what might be causing this trouble?

Umm you should try downloading the Chromium source and figuring out what it's doing! We need Jens programming, not debugging other people's code. :~)

Ah. Well our general strategy for this sort of thing is to place lots of our grad students in Google and Microsoft when they get their PhDs and then use them as spies and secret agents. @jens we should ask Dan who we have in place...

I Googled "slow tab switching in chrome" and not surprisingly many people have been complaining about this for several months. (And I doubt many of them are using Snap!

I gave up after 10 minutes seeing if someone had an explanation or workaround. Though some people claimed that just having Chrome's task manager open fixed the problem. Maybe I'll try that. 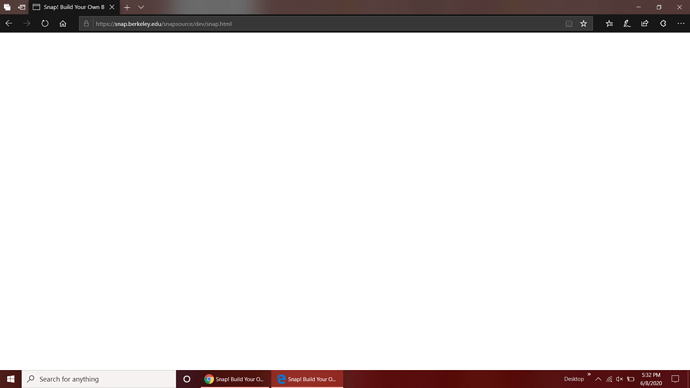 Screenshot (11)1920×1080 141 KB
Now, a funny fact is that page's title and favicon did not load the first time I manually typed the address, later, when I copied and pasted the link, it only loaded the page title at first and then after about two minutes also loaded the favicon. I do not think this a network problem but an Edge bug.
jens June 8, 2020, 11:50am #15

I've just installed Edge on my Mac and it works fine, no delays.

I am on Windows 10 Pro. Is it possible to be a Windows issue?

I don't get it. I'm using win10, google chrome version 83.0.4103.61 (though when I went to see what version it was, it started to update), and I'm doing just fine. (I also turned off background sync) I also opened a large project.

ok, Edge is lagging a lot.

@Jens, it loads super fast on Firefox. No delays, no lags.

FWIW: My Chrome experience is back to superfast switching and execution. No delays.

rebooting once in a while sure helps