Look, I know that has been requested so many times, but snap7 adds the NEW CATEGORIES feature, and It would be nice to add an "events category or something." also,

Scratch custom blocks belong to a particular sprite. In Snap*!*, you can make sprite-local blocks, but the usual thing is that a custom block is available to all sprites. So it doesn't make sense for it to "live" in one sprite's scripting area.

Our idea is that once it's written, using a custom block should be just like using a primitive block. You shouldn't have to know that it is a custom block. In particular, custom blocks can be added to any of the palette categories.

We expect writing custom blocks to be an ordinary, common event. If we showed all custom blocks in the scripting area at once, it would be super cluttered. One purpose of custom blocks is to reduce the size of scripts by replacing commonly used chunks of code with a single block

reasons by YOU why the when <> block is not enough

The problem is, how would you define the block?

reasons by YOU why the when <> block is not enough

I'm sorry, but could you spell out what those quotations have to do with generic WHEN being inadequate?

I think he/she just wants a custom hat block with it's own text and stuff. 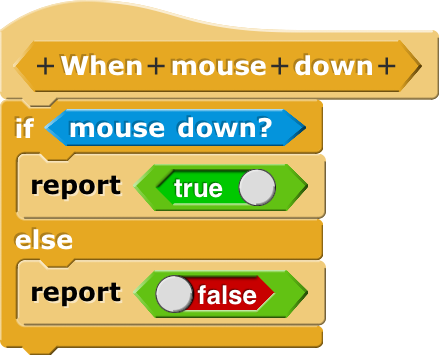 Well to be honest, that might not work very well for a new user, even with some edits. I still think the generic when block works fine, and makes sense to new users.

Instead of this you could just REPORT <MOUSE DOWN?>. :~)

Not all users are new users, also why does the JavaScript function exist if it won't work well with new users?
Also, why can't it start with an if block like a custom reporter block does with the report block?

I know, I was just trying to visualize whet @joecooldoo said.

Not all users are new users,

That's true, but new users should be the first thing to think of when making a programming language, especially one that appeals to kids.

True, but you're forgetting about this part

Also, why can't it start with an if block like a custom reporter block does with the report block?

why does the JavaScript function exist if it won't work well with new users?

also I'm still kind of new, and the JavaScript function looks absolutely horrifying to me. I'm not saying it should be removed, though.

I was more focused on the first part.

why does the JavaScript function exist if it won't work well with new users?

It's hidden under a toggle called javascript extensions.

why can't it start with an if block like a custom reporter block does with the report block?

It could, but I'd prefer not to use an if block when defining a hat block.

how else would you make it?
also you can remove it just like you can report block.

how else would you make it?

I don't know, but right now, a generic when blocks makes more sense than a custom hat block.

I think he/she just wants a custom hat block with it's own text and stuff.

some people just want this.

Solution:
They probably will not be added.
But in the slight chance they are, it will most likely be added in 8.0+, which is a long time.

Don't worry, we're not removing features because they might be too complicated for beginners. Otherwise we wouldn't have first class continuations!

But when designing a new feature, it's worthwhile asking yourself "how simple can we make this?" And also "what's a compelling, self-documenting visual representation of this feature?" I always point to the right-then-up arrow at the bottom of REPEAT and FOREVER, etc., to remind you that this is a looping construct (as opposed to, say, IF) as one of the small brilliant design decisions in Scratch. For us, it was easy to decide that we wanted lambda, but it wasn't easy at all to work out the visual representation.

Or just use "if Mouse Down?" or "when Mouse pressed" or something like that.