I am working on creating an animation in Snap! that is a simulation of a physical animation machine. I created a strip of animation images in Snap!, exported the stage as an image, and then imported it into my animation program. However, when I do this, the animation strip image gets even more distorted/blurry, and I'm wondering if Snap resamples the imported image somehow? Is there a way to avoid this or fix this in the program?

I am attaching two screenshots below. The first is the original animation strip I created, and then second image is what one of the images from the strip looks like when it was imported. 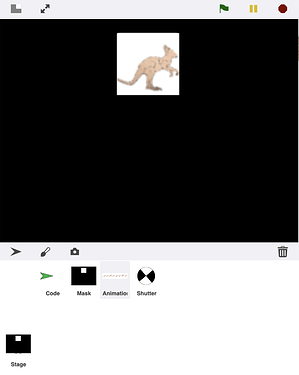 I'm a little confused about what you're trying to do. You must have had the individual images in order to stamp them on the stage, no? Why are you combining them and then separating them again?

I was aligning the individual images in Snap! to make an animation strip of 8 images, then exporting the stage. Afterwards, I uploaded the strip to a second Snap! program, which is pictured in the second image. The second image I included above has the whole animation strip in it, I just have a Mask sprite in the program so that as the strip moves left to right, only one image can be seen at a time. I know this could be done by just using the individual images themselves, but we are trying to simulate a physical movie machine that would use a film strip. So, if a student hides the Mask sprite, they can see that there is a strip of images moving behind it. We are just not sure why the image of the strip itself looks to be of lower quality when it is uploaded to Snap!.

Ah, probably because of antialiasing, which I'm told Javascript does for us as a favor.

If it looks okay in the first project, maybe you could combine the two, so that the strip on stage is made just in time?

which I'm told Javascript does for us as a favor.

which I'm pretty sure that in the topic about it, we found out there's a way to make it not use anti-aliasing.

which I'm told Javascript does for us as a favor.

which I'm pretty sure that in the topic about it, we found out there's a way to make it not use anti-aliasing.

:throws up hands: I only work here...

Here's that solution, by the way.

From "Is there any way to scale / stretch a small costume without it getting blurry?":

Is there any way to scale / stretch a small costume without it getting blurry?

Taking Brian's basic algorithm, I've come up with this sped up version

(sorry for late response, i was making a mcdonalds simulator that has uhh nicki minaj in it i guess??? this is the thing i was working on. there are like 3 endings)

It gives you incredibly salty fries and two-dimensional burgers?

It gives you incredibly salty fries and two-dimensional burgers?