Look what happens sometimes when the sprite rotates:

At the end: I show the code to show you the code isn't doing anything to the sprite. Here is the project so you can try it yourself: Snap! 7.0.5 - Build Your Own Blocks

So do you mean about the fact that the cube jumps up and down and isn't stationary?

Notice the sprite goes back to normal when it rotates again. I don't know why it happens.

can i use your physics to play around with please

It seems that "telling" sprite to rotate causes some problems with a costume when the large canvas is used. Ground sensors rotation scripts seem to work directly in Player sprite without a glitch: Snap! 7.0.6 - Build Your Own Blocks

Nevermind, I can now see it.

Seems that this only happens in the editor though. Never has happened to me before.

I just found a weird glitch where you can go through the ground.
You can do this by going to the hill portion on the left side of the screen.
It happens because the script thinks you are falling down as that part of slope is curved downward.
So the script moves the player down.

I'll let this picture do the work for you. 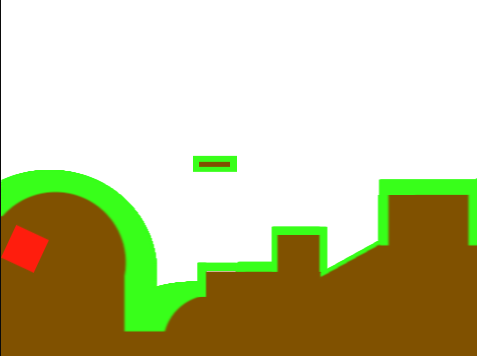 Odd. Will this be fixed @jens?

It happens in full-screen.

I already know about it and there isn't really a way to fix it. Just look at how the scripts work.

The code doesn't even use that block.

I just assumed it was because its a common issue