I made a project that implements Lua coroutines or generators using first-class continuations. Continuations are cool.

I made a fibonacci sequence example. Press the green flag, and then press space to show the next fibonacci number.

But it seems that call stack will be leaked and because of indirect circular reference no optimisation (eg tail call elimination) can be applied.

I think this coroutine library would be very good for stopping audio and continuing it.
Does the library work with audio?

I'm sorry but I'm not sure what you mean by the call stack leaking, and what causes the indirect circular reference.

Would rearranging the script like this fix the problems you mentioned? 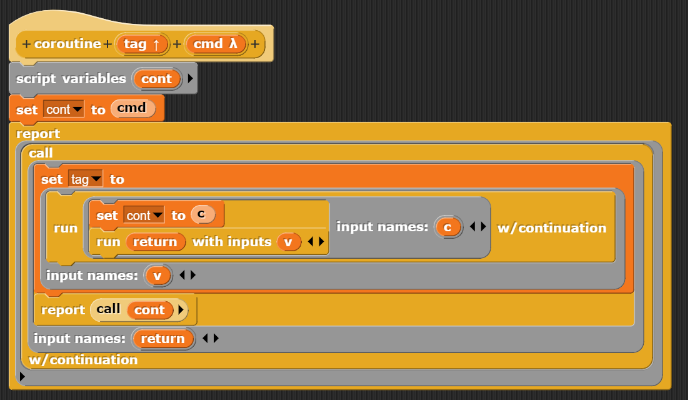 I was thinking of the sequence: cmd continuation calls the tag continuation (yield), then the cmd cont. is called again...

Oh, it's not that important with finite generator/coroutine.

("Pzthonäs"? QWERTZ is a bit hard to get used to.)