It would be really useful if block outputs were able to be copied and pasted. I don't just mean text results, although that would be good to. I mean that if a block outputs a block, you would be able to drag that block into the scripting area and use it. This might be hard to do, but could lead to some really cool projects!
Example: 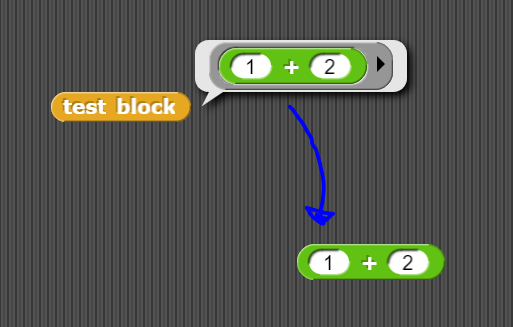 Dragging into the scripting area would make sense only for the case in which the value is a block or script. You couldn't drag a sprite in, for instance.

I bet it wouldn't be that hard to implement a JS Function block called ⌘C that would take an input, serialize that value, and pass that to the system clipboard. Serializing (converting to XML as in project files) would make any Snap! type copyable.

Or Ctrl+C if you don't have a Mac

I guess, it was meant the function would be "called by " (as opposed to "called") the key combination?

I think he meant that the function is named ⌘C, and you pass the block as input, which you can then paste with Ctrl+V.

Yeah, what he said. :~) I didn't want to call it "copy" because that sounds like making a copy of a list or something.

For Text, you can maybe add, that you can highlight the text, and then do anything the browser gives you, and for blocks you can just drag them out. Other outputs (for example sounds) could be dragged do a sprite and then appear in the sounds library or wherever. To close the speech bubble, you can just click anywhere else.