So, I think when converting some 2D lists to JSON will return an empty list.

which is definitely a bug since you want to keep all the data you put into it.

Yes. All data is important to save for the big project I'm making...

I'm pretty sure that isn't valid JSON. It has to be in square brackets or something.

It does as expected with 3 items in the nested list

Maybe there should be some further discussion on other reported values

I, personally, think that

Link to project with examples in it
ProjectName=listToJSON

OK, but I need to find a solution asap.
Is there another JSON converter I could use?

I'm currently experimenting with writing one but not there yet

I'm also looking after a new puppy while my daughter is at work, so can only come onto the computer when she is having a nap!

Would a quick piece of code work for all your current scenarios? 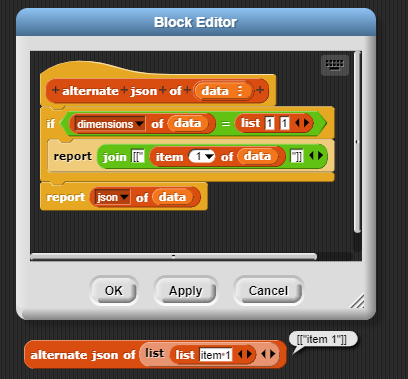 Weird, it only do that for row lists.

It is, because I did this 2 days ago and it worked, but row lists dont work now???

Seems that I've found another bug:

It's the same issue

JSON is not a good format for recursive list. Things are even worse with heuristics used by Snap

The problem with the first example is that

gives exactly what most people would want and accept

However, when going back to JSON - the first issue is that the single 1 entry is ignored (as per original reported issue) and the two element sub-list is treated as a key/value pair which is not always (as in this case) the required output.

Also, I think that any list->JSON conversion would have to treat any alphanumeric data as strings and bracket the items with ""

Does this problem also occur with the csv format?

The 2 formats are completely different - csv is much simpler, so no it doesn't have the problem.

But in any case I don't think we should offer JSON OF and SPLIT BY JSON functions that aren't inverses. No promises that Jens will agree. There are various ways we could fix it, basically involving various ways to represent dictionaries in Snap!.

Thank you for pointing this.

For the json problem: