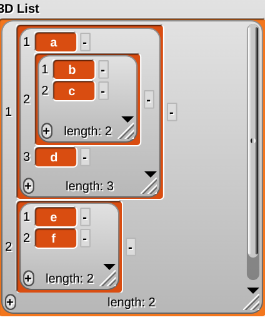 What are 3D lists?

There's a flatten function behind length 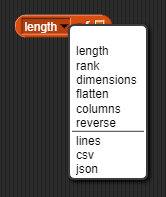 Huh, didn't know that existed. It was fun making the block though.

The nonspecialist meaning of "dimension" as in space having three of them is related to the technical meaning. Think about how Snap! displays lists. A 1D list is shown as a single column of atomic items. But a 2D list is, by default, shown as a spreadsheet, in which every atomic value has a row and a column. Snap! isn't very good at showing 3D or higher dimensional lists; we display it as a spreadsheet (a table) in which the individual cells show the sprite input icon, which when clicked opens a view of the innards of that cell.

A list can have any number of dimensions. (In string theory they deal with 12-dimensional lists!) This idea of dimensions comes from linear algebra.

PS If the result you want is really a 1D list, just use

I'm having trouble thinking of ways to describe them

i think they were trying to do a shrugging kaomoji

Well... I guess that is a kaomoji.