So if you want to put some code from a coding language like Python or JAVA, you can do this:

NOT ANYMORE IT DOESN'T.

Every single letter or character of code is in the same color. So I guess it doesn't work. Please vote if I should delete it or not.

I don't know if this is supposed to happen, so I guess it's safe to say that it is sort of a success.

Nothing happened. Should we vote to delete this?

The simple Hello World program but made tricky. Why did you have to do that, C developers...

Those are the only ones I know. Feel free to experiment tell me.
ALSO YOU NEED THE ``` PARTS AT THE END OF YOUR CODE!

I put all the code into preformatted text because the

So if you want to put some code from a coding language like Python or JAVA, you can do this:

Your examples don't clarify that you also need a line with (nothing but) ``` at the end.

I can't really add another ``` at the end, it won't show even with preformatted text on.

Fine, but anyone who reads your tutorial needs to know that they're needed!

I was so confused for a long time, until I found out you stuck in an invisible character here

You're looking at a new line character. They did it like this: 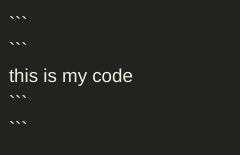 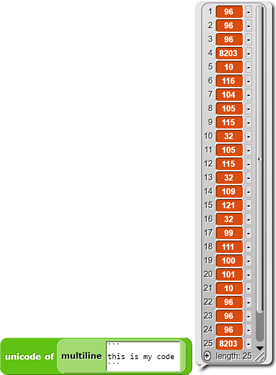 ```
Fun fact:
Just like with many programming languages,
Discourse uses \ for escaping characters.
```

Your examples don't clarify that you also need a line with (nothing but) ``` at the end.

I just fixed that.

There's also text for no formatting:

Java is not an acronym, therefore it should not be capitalized.

Well it normally is...

I meant that Java should not be written in all caps.