What's problem you are encountering?

What have you tried that didn't work?

is what you looking for ?

Yes, that's what I was trying to do. One question:

you can hide it, i will modify the remix... 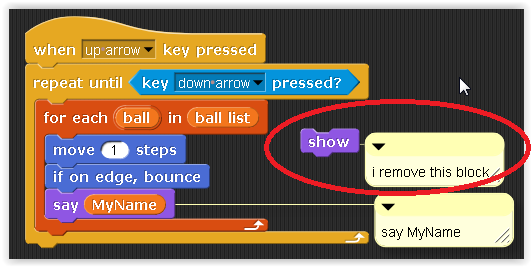 I added a script near the bottom of mine, and I want the prompt to be asked once per key press, not five times. How can I limit the ask to just once?

P.S. Is there any document I should be reading that explains all of this? (Please don't say it's the Reference Manual.)

you can just make it run for only the original sprite, just do this

and yes, I know this isn't the best way to test for a clone, because you can set temporary to false for a clone, but he's most likely not gonna do that.

The desired behavior is that nobody moves on the second (or subsequent) time around, until the user has given a new answer to the question. I was able to get this by incorporating the move logic into your if-block. A more fundamental question is, why is this script being executed for every sprite in the first place?

why is this script being executed for every sprite in the first place?

Got it. And with that new understanding, I'm now able to get the behavior I want by moving the new script from the (parent) Sprite to the Stage (where it executes only once per key press). Thanks.