If I just plunk down in the scripting area:

where "box" is a sprite name, nothing happens, the parent isn't changed, there is no error.

However, if I try this in a script (using 'tell ...'), I get a TypeError: can't read property cloneOriginName of null.
I have a workaround for this, but am wondering about the lack of error in the first case, and also if the set by name seems like a reasonable thing to be able to do. The lack of error in the first instance initially led me to believe it was working and took me down a path that required the workaround.

If you just type the name, it doesn't work, but if you put the object reporter in the input like this

Yes, I wrote a simple reporter to walk the list of sprites and return the one with the name I wanted: the workaround. other questions are still on the table.

It should be possible to use the join block to set the parent to the sprites you want like a car with the JavaScript function block, but I have not tested it yet (because I am on my mobile).

Maybe the context will help: I'm creating clones and giving them names and parents, so I wanted to refer to the parents by name.

I don't get that idea, and am pretty uninterested in JavaScript at this point; no offense. I also have a solution to the original problem - maybe I should have posted this to another topic.

I cannot think of a simple solution to the problem without it because the set ____ to ____ block only lets you set values for vars. 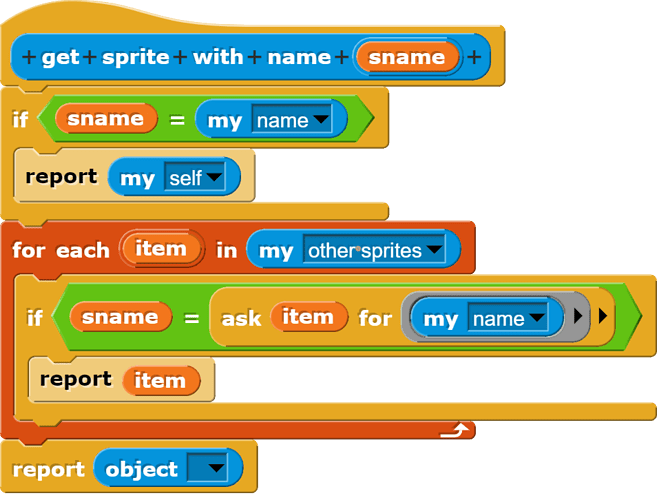 the empty object return at the end, on failure, doesn't really work, but if there is a sprite with the desire name, it does

here's a much much simpler way to do it

excellent! and really amplifies my initial question about the 'set parent' not working with names.

I guess this is mostly a question about error reporting, but I think the ask and tell blocks introduce some confusion between a sprite and its name - I'm not suggesting to change that.

You can just do