EDIT: This C# Emulator has been postponed until further notice. you can still use it, just it will be bare-bones and empty in commands.

After one month of working, I present to you...

A C# Emulator with only one command :|
(Boooo! You suck!)

But that's okay, right?
Anyways, after one month of working, I present to you a C# Emulator project fully made in Snap!

The reason why I don't have many commands is because I am more of an intermediate coder, and this C# emulator is more of an advanced project for advanced coders, and so it would probably take a long time for me to actually implement commands. So sorry.

This C# Emulator is inspired by Scratch's emulators (Like that GameBoy Emulator from a long time ago).

It is very unfinished and doesn't have OOP structures. There are no classes, no voids (Functions), and definitely no advanced commands.

It doesn't do anything? 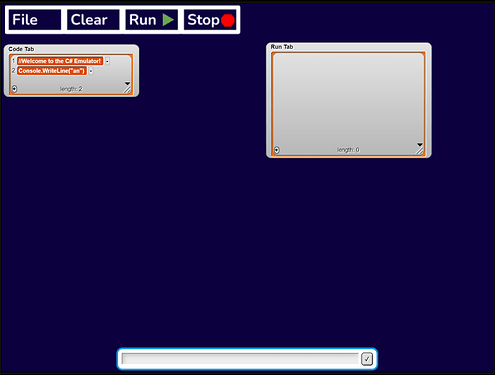 You have to press the "Run" button (Sorry for not explaining that).

Also if you didn't add a ; or anything, it won't work.

Also if you have 2 lines of code, one with some symbols missing (Like a ;) and another with the correct symbols (Like Console.WriteLine("Hello World!");) then it won't work.

Alright, everyone. Let me explain some things.

The "File" button currently does nothing but I plan on adding upon that sooner once I get the help I need.

The "Clear" button clears the code (All of it). I couldn't make it clear one line at a time.

The "Run" button runs your code (Not walks!)

The "Stop" button stops your scripts and also clears the "Run" tab.

The "File" button currently does nothing but I plan on adding upon that sooner once I get the help I need.

I actually did that and nothing happened. That's why I posted that...

Also if you didn't add a ; or anything, it won't work.

Thank you for the advice!

The "while" command STILL doesn't work!

Alright, I'll take a break from development while I try to figure out how to make the void, class, and using commands.

A simple HelloWorld program would look like this: It would contain the "using", "class", and "void" commands before it actually runs the separate commands. My "HelloWorld" program in C# would only consist of the Console.WriteLine(""); command, which would be a syntax error right out the bat.

Alright, it's been one day since my last post, and I still can't get the commands like using, class, and void working at all. So I'll probably quit if no one is willing to help me.

I can't figure out how to do those commands, and I don't have anyone to help me, so I'll just leave it alone for a while.

And so far, like I said, no one will help. No one will help me with the code. Only a few people said anything about my C# Emulator project. So that will be a tricky thing to do for me.

Sadly, my code doesn't even run anything even after adding some stuff. It's just been so hard to actually think about how commands will be structured.

I'll try to declare when this project is finally dead.

I need help with my C# emulator project

Well I've made a C compiler in Snap! before. It's not the full C, it doesn't have most types or arrays or structs but I've learned a lot on how language compilers/interpreters work.

Anyway, so, for starters, you should program it to generate a list of tokens from the source code. For example, Console.WriteLine("Hello, world!"); could be:

Then your program would read this list of tokens. It would read the "Console" identifier, then the "." symbol, the "WriteLine" identifier, and then the "(" symbol. From this it would conclude that this is a function call to Console.WriteLine. So after that, it reads the next token as arguments, and if the token after that is not a comma, it stops reading the arguments. Then after that is done, it expects there to be a ")" symbol. If there isn't report a syntax error. Then of course check for the semicolon.

Usually I treat this list of tokens as a stack. I can only read the first element, and when I want to move onto the next element I delete the first. This is so it's easy to keep track of the where the parser is in the token list across multiple custom blocks.

To parse expressions you can use this method . This method will create a tree data structure of the expression, accounting for operator precedence. So 1 + 3 * 5 could be turned into something like this

The method you're currently using is hacky and kind of works, but doesn't scale well for things that have more complex syntax.

I'm going to stop the C# Emulator project for a while. I know. It's sad. But I have to do it.

I'll maybe consider coming back to this project sooner in the future, but for now, I'll just make some other stuff in Snap!.