I made a collection of blocks. I'll add more, and you can suggest blocks to be added here.

Maybe an idea to post a picture of what the blocks are in your post so people can see what you've made?

Maybe an idea to post a picture of what the blocks are in your post so people can see what you've made?

how do you take a picture of blocks

It all depends on what type of computer operating system you are using.

Or you can right-click on a script and select script pic and it will download an image of the script.

... and if it's a reporter, you can select "result pic" which will call the block and show the result in a speech balloon next to the block in the picture. I use that all the time for the manual.

how did you make the SAY_in RPG style one?

btw, some people don't know what RPG style is.

btw, this is a better script than your say in RPG style block. 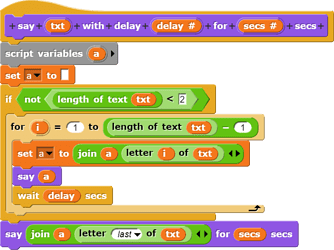 ok i changed it

could you add a block like the say with delay/say in RPG style but with no borders?

what do you mean by borders?

I'll see what I can do

I added a pen block. Is it what you asked for?

ok that works, thanks!

I fixed the "write slowly" block. It wasn't saving the position of the sprites correctly.
I also added thinking variants for the "say [] slowly" blocks.