I finally made my BASIC interpreter as I said I would last year. =D
Right now it's very slow since it just interprets BASIC. If I made it compile BASIC into Snap! code (which I'm planning to do) then it would run way faster.

This looks terrific but it's 2:30am and I have other things I've promised to do, so I may not give a serious reply for a little while.

Wow. Just wow. My brain hurts even thinking on how this would work.

Umm... why can't I edit the original post? I wanted to add another example:

Oops I was supposed to read this a long time ago, sorry!

It's very cool. I'm quite impressed.

The code is rather hard to read. One thing that I think would help a lot is data abstraction, so that things like

could be replaced by

preloaded libraries script pic (1)716×68 17.2 KB
or whatever the right thing is. And constructors to make a token given labelled components:

And maybe more subprocedures. The rule of thumb is, if your scripting area or a block editor has a scroll bar on the right, the code is too long. It's just a rule of thumb, but it works pretty well for me.

Data-directed programming could help with the long else-if chains for all the BASIC commands. Make a dictionary (a Snap! one, not a JS one -- a list of two-item lists) with command names as the keys and procedures as the values, so you can replace the long chain of IFs with

Don't worry about the speed. Make it perfect and finished, then worry about speed. One of the fundamental rules of computer science is, "It's much easier to speed up a correct program than to debug a fast program."

I tried to trace out how you got the grouping of arithmetic operators to work, and couldn't figure it out. I saw two pieces of code, one commented with MD and the other with AS, but they looked the same apart from the operator symbols. Maybe data abstraction would have made that clearer for me. Or maybe you need a subprocedure with inputs of a list of operator symbols and a numeric priority, that you can call for all the infix operators.

I agree with your ideas. I wish I didn't start the BASIC code execution block by starting out with a bunch of if-elses because now it takes 1:30 to open the block editor for that block and it takes 5 seconds to redraw the script for when I drag out or change a value or put in a new block... My excuse to not doing that earlier was that I would have to redefine every script variable for each procedure, but I realize now doing so doesn't take that much time, and I would rather have the data-directed instead of the long if-else. (also, how do my script builder blocks help you make macros? couldn't you make the process execute the Context without making a new variable scope?)

I think I did the if-elses in the first place because I remembered I made a really basic program interpreter in Scratch (it didn't have expressions you could only do mathematical operations on variables (which were memory locations)), and because of the limitations of Scratch I used a whole bunch of if-elses. There was also a GameBoy emulator in Scratch that used a bunch of if-elses for each command in the gameboy machine language and I guess that encouraged me to think that a bunch of those if-elses were fine.

Also, I've never heard of "It's much easier to speed up a correct program than to debug a fast program." I think that will be very helpful.

maybe you need a subprocedure with inputs of a list of operator symbols and a numeric priority, that you can call for all the infix operators. 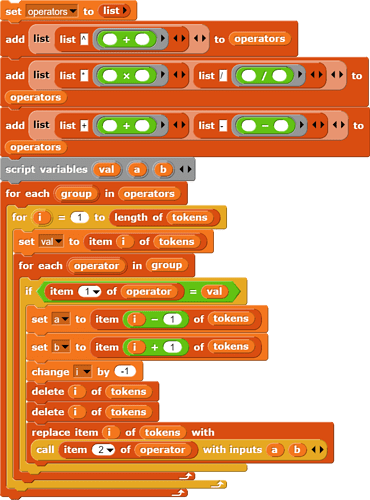 Also why can't I edit my original post? Is it because I edited it many times already?

Also why can't I edit my original post? Is it because I edited it many times already?

I have no idea! You should be able to.

Yeah, your code in this message is fine. There's an Official Right Thing for parsing infix that lets you just scan through the list once, left to right, keeping a stack of unused values and a stack of unfinished operators. When you see an operator, you compare the precedence of that operator with the precedence of the one on the stack. If the new one is lower precedence, then it's time to carry out the one on the stack, so you pop off two operands and one operator, compute that result, and put it on the operand stack. Meanwhile you're still looking at the same new operator, but the operator on top of the stack of operators has changed (because you popped one off), so you do the comparison again. Eventually you get to where the new operator is higher precedence than the one on the stack, and so you push the new operator onto the operator stack and push the value to its left onto the operand stack. I think that's right. Anyway, the gory details are here: https://people.eecs.berkeley.edu/~bh/v3ch5/langi.html (search for "precedence").

(also, how do my script builder blocks help you make macros? couldn't you make the process execute the Context without making a new variable scope?)

I'm trying to write it entirely in Snap!, so that I can easily play around with the design. Honestly, I haven't started yet -- a combination of the forum keeping me busy and a general depression that started before covid but hasn't been helped any by enforced isolation. But it's on my list of things I really want to get going on! That and writing a Snap! tutorial book.

PS I understood what the "MD" and "AS" comments mean! I used to be a teacher. :~) I just couldn't figure out the code to which they were connected.

You're going to say association list on the manual.