are we gonna get real profile pages?

Like, Scratch profile pages. A place to describe yourself, show your published projects, and collections you are in.

show your published projects, and collections you are in.

Those already implemented. You can go to your public page to see yours.

https://snap.berkeley.edu/user?user=HighFlyer222 has your published projects and collections. I don't know when the Snap Team will add places to describe yourself

I'm confused. Isn't this what you're asking for? 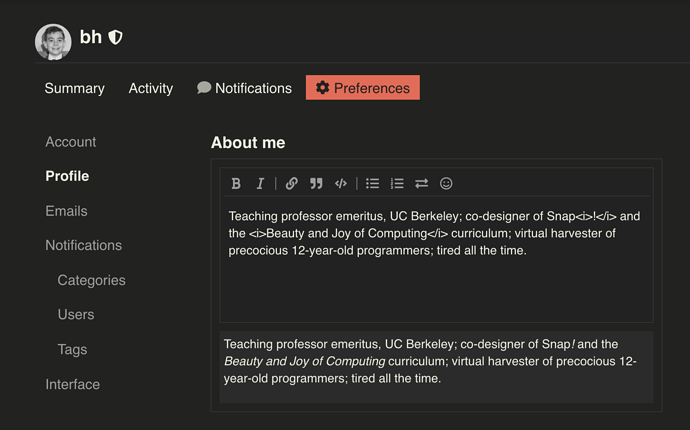 what do you mean by "virtual harvester of precocious 12-year-old programmers"?

Oh, we have a long history of discovering amazing young programmers and putting them to work. First and greatest was Nathan Dinsmore, nXIII, who, among many other things, wrote the code for importing old BYOB projects into Snap!. Back when Jens and I posted a teaser for BYOB 2.99 on Scratch, before we published the actual program, we got a same-day "bug report" from Nathan about a likely bug in BYOB based on the screenshots we'd shown. (Not that the screenshots displayed wrong results; he analyzed how we had probably implemented what we showed and worked out that the likely implementation would have an inconsistency.) And he was mostly right: We had had that bug but had worked it out ourselves. (P.S. I'm not breaking rules by telling you his name; we got permission from him and his parents when we wanted to include him in the acknowledgements in the manual. And now he's, I dunno, in his 20s.)

He was 12 when he sent us that bug report. "12-year-old" in my profile isn't a precise number; they're not always 12 when we find them, but an awful lot are middle school aged and I think 12 is probably the mode, although I don't really keep statistics -- for one thing, we're not allowed to ask for kids' precise ages. You can find more in the manual. Dylan Servilla, @djdolphin, is the most recent major contributor, with a system to simplify translation of help screens that Jens is still figuring out how to integrate into Snap!. (Dylan's code is fine, that's not the issue, it's that Jens doesn't want to include all the translated versions in the code that you have to download to run Snap!, so it's a matter of doing the translation to your particular language on the fly.) Dylan is a year into university, so no longer 12, but we've been friends for a long time.

So, like that. A while ago we had a clump of functional programming/lambda calculus experts show up more or less all at once, just before we moved here from the Scratch forum. I think we've lost them. :~(

Anyway, the thing about middle/high schoolers is that middle/high school is basically trivial, if you're a smart kid, and so they have plenty of time on their hands. Once they're in college, even though they know more, they're actually pretty busy and so not such a reliable source of free labor.

Having said all that, Jens gets mad if I try to put kids to work on Snap! itself (partly because 12-year-old Nathan was a little arrogant and Jens hasn't gotten over it, I think, but also because kids aren't so disciplined about writing clean code) so mostly they get to contribute ancillary software such as Snapinator, originally by @hardmath123 and rewritten by @djdolphin.

You have to imagine Brian as one of the Jedi masters on the council, inducting younglings into the Order to be trained in the ways of the Force before unleashing them upon the galaxy as guardians of peace and justice.

Yeah, but on snap.berkeley.edu, not the forum.