When I first saw the

block I thought it meant to crop sounds, but I tried using it and it didn't really work.

Can somebody tell me how to use this block to crop sounds? If it doesn't crop sounds, then what does it do?

It tells you how long (in number of samples) the sound is! Reports a number, in other words.

If you want a lot of tools to do with sounds, then you can visit my project

It has a lot of sound editing blocks. You can edit them to see how they work.

Thanks. Nice work btw.
Does it include a block that can make the sound, sound robotic?

Nobody has that! And although Scratch claims to, it doesn't really.
All the blocks are under sounds, so you can see for yourself what it has.
It supports both single- and multi-channel sounds.

I made a new echo block (Like Scratch doesn't have) but my headphones are charging so you'll have to test it out for me.

Aye. I have tested it out and ngl it is very fast o.O and loud too

I tested it now and t seems to work.

Hm. It might need to be at it's normal speed in order for it to be more realistic. For me, it is very fast to the point I cannot tell what they are even saying.

It's not extra fast for me

I tested out the record block, and it doesn't play the recorded sound a whole lot faster than I recorded it. btw, I am using my computer audio as a mic.

also, the echo block does speed up the sound

edit: it's the sounds at once block.

I did not understand half of what you said, sorry.

edit: it's the sounds at once block.
also, the echo block does speed up the sound

Oh yeah, that does speed it up. You'd probably want to use the daycored block in conjunction with it.

EDIT: It does work, but you have to make the (20%) higher. and if you make it 80% it doesn't really sound like it's echo-y. If anything, it sounds like I just created my own sound lol, it's almost like nightcored, but it sounds slowed at the same time. Sadly, I was going to remix it to show you how it sounded, but it was higher than 10mb.

Here's what i did. It sounds really cool.

image798×58 15 KB
this sound effect? Will you make a new custom block that makes the sounds sound like this?

when I tried the play sounds at the same time, it just played the first sound instead of both. When I took the new sound block out, then tried it, it worked, but since I was playing the sound directly from a list, it didn't play at the right frequency. 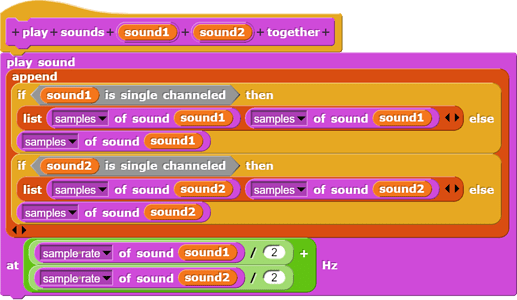 Sound and costume tools script pic944×548 107 KB
I have not tested this script with two sounds with different frequencies, but I assume it'll work.
next page →