Made Alonzo in the style of Scratch 2.0: 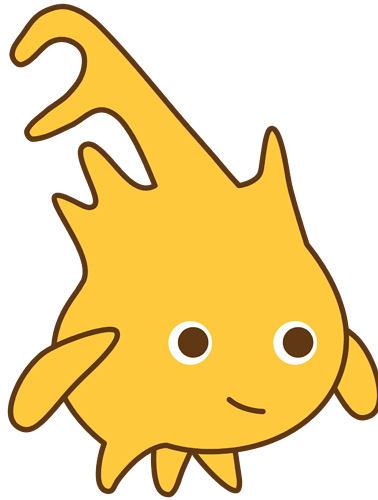 Thanks! You might notice that my signature is gone and that there's something cut on Alonzo's rightmost.

He probably just used an editor.

SVG code can be generated automatically by a editor.

Don't be a debbie downer

Also those contents, by definition, isn't code, since it isn't meant to execute instructions.

That's a great start but there are a few things that need work. You mentioned the worst one yourself, which is that the bounding box is cut short on the right, messing up Alonzo's left arm.

The next thing, I think easy to fix, is that the brown borders and smile are too narrow. It's not obvious when you display your version super large, as you've done here, but if you look at it Alonzo-sized and compare it with the existing svg Alonzo in the costume library, you'll see how much thinner it is.

Then there are the subtle things in the shape of the lambda. I think neither your version nor ours is right. Yours is better in that the thickness of the top part is uniform. That's much better than ours.

But there are two subtle problems with your lower-left leg. One is that its slope should be more nearly vertical -- not by much, just a bit. I think the problem is that the top edge of that leg has the right slope, but the bottom isn't parallel with it.

And going along with that, the bottom leftmost tip of that leg of the lambda should be a short horizontal stroke, not rounded as you have it. Look at the lower-left leg of the actual lambda character: λ. Zoom in on that and you'll see clearly the flat end of the lower left leg. And the leg itself is straight and of constant thickness. This holds true across a wide range of fonts. By contrast, the shape of the top part varies a lot across fonts:

(The ones with vertical or near-vertical right sides are italic fonts; even in those, the end of the lower-left leg is strictly horizontal.)

Note that, leaving out the two italic fonts, the slope of the right side of the lambda is virtually identical in all those fonts. Alonzo (all versions) has a right edge that slants way too far to the left. I think I was trying to compromise between lambda and Gobo. But the left edge of Gobo's long spike does align pretty well with the lambda slope, and so does ours.

So, yeah, can you fix those things?

Made a improved version of Alonzo in the style of Scratch 2.0:

What's the difference between the original one and the improved one I just made? What do you think?

Just like how Scratch 2.0 Gobo is based off of Scratch 1.x Gobo, I based the improved version of Alonzo off of how Alonzo appeared in BYOB: 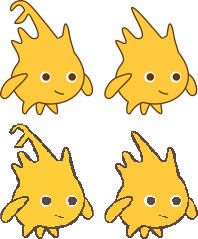 I also made the exact same improved version of Alonzo in the style of Scratch 2.0, but as a vector graphic:

All thanks to me, Eric!

that's very mean. if you didn't like it, you didn't have to say anything.

The brown borders and smile are still way too thin, although improved.

Everything else is stuff we do wrong also, but if you're going to make an improved Alonzo it might as well be perfect:

You did make the end of the lower left leg flat, thank you, but it'd be better if the join between that flat part and the side of the leg were sharp, not curved. (Again, look at an actual lambda character.) Also, look at this:

This is terrible artwork, but the main point of it is the red line, which is meant to show that the bottom part of that edge and the top part, over the lower left leg, should be collinear. I also made the whole thing more nearly vertical, just slightly, but that's not the important part; I just think doing so gives you more room to shift things around at the top.

PS My brown lines are too thin also! I can see how that happens. :~)

This means that there's nothing to improve, as if it's perfect.

This means that there's nothing to improve

There was plenty to improve upon in my original BYOB artwork...you don't have to be defensive. I was just thinking that since you were putting in all that effort, with a little more you could have a better lambda than I could draw back then. But, whatever.