Add round to the sqrt of block

First off, I dragged out round and tried relabelling but it has no relabel option

So then I thought, maybe it was introduced into a library - searched them - didn't find it.

Started to question my sanity

Did I just dream it?

So, I thought - lets ask for round to have relabel options for all the (is monadic the word?) operators

There are a bunch of places where blocks could be consolidated. My favorite ones are in the Sounds category, with set [instrument/tempo/volume/balance] to __. Most such cases are historical leftovers from Scratch. I think the underlying issue about ROUND is that someone thought, maybe correctly, that 8-year-olds would find uses for round but not for the transcendental functions or square roots. We've confused that history by adding things like floor, ceiling, neg, and id to the sqrt block; arguably we should have put those in with round. (Especially floor and ceiling, which are variants of round!)

Speaking of confusing the history, our recent invention of using relabel for access to functions we want to pretend we don't have obscures its original purpose for use in debugging, for situations in which you change your mind about which function you need at this point in your code, or situations in which you have to use an almost-the-same rewrite of a chunk of code, but with < instead of > or something. Based on past history, the things like not-equal should be menu options, not hidden in relabel. But we did it as an attempt to have our cake and eat it too about commonly useful functions that are also great programming exercises.

So anyway, maybe someday we'll have a big cleanup of all this, but maybe not.

Did you know that in - very - recent Snap! versions you can now also find blocks by searching for an item in one of their dropdown menus? 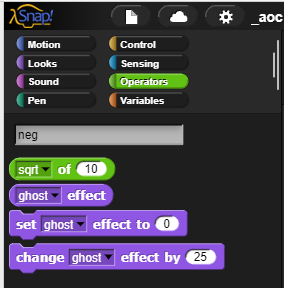