A short animation I made

I'm new to Snap!, but I've been doing Scratch for several years now, so I've got some expertise with block coding. Here's the animation, titled jade is exist: Snap! Build Your Own Blocks

I'm new to the forums as well (duh) so I don't know for certain if I'm doing this right.

although, this may not be very reliable.

Welcome to the forums!
Using the timer to detect if someone has left the page is super clever. I feel like that could be used in things like horror games to create some really scary stuff.

I do have a suggestion, though- if you add a variable (I'm calling mine "intimidated") you can make the "What do you think you're doing?" code run only once. I felt like constantly moving between tabs and back to the project kinda ruined the effect. 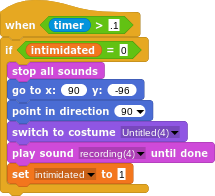 EDIT FOR CLARIFICATION: Switching between tabs kept replaying the "what do you think you're doing" which ruined the effect.

Thanks! And that's a cool idea for a game, I might do that!

And I'll do that, thanks for the suggestion.