I am suggesting a block which is a
[scratchblocks]
pause all except for{
}until that is done :: control
[/scratchblocks]
(or something like that)
so it's just a warp block but does not run the part of the script enclosed faster.

I think this request is incoherent. WARP doesn't make your thread run faster by overclocking your CPU! All it does is prevent the running of other threads, and so that gives the freed-up time to this thread.

So the warp block basically does what you want!
PS:I once had my browser crash because I had a forever loop in a warp

no it does not at all. see the "help" for warp, or try the script

then put a warp block on all of the script, and it will seem like it is not doing anything since it will be so fast.

i think at the end of a loop, the thread pauses for a while so other threads can work and so forever loops don't freeze Snap!. the warp block prevents this from happening. which is why putting a forever loop in a warp will crash Snap!.

um I think you replied to the wrong person

no i did not 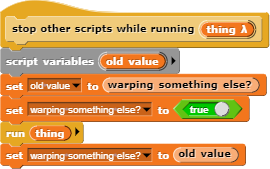 at the beginning of the main loop in every sprite, like this: 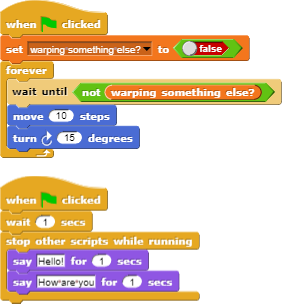 yeah, but then when the scripts are paused, it finishes the script, then it waits.

Gack, you guys are making this way complicated. If you want to see the sides drawn one at a time, instead of 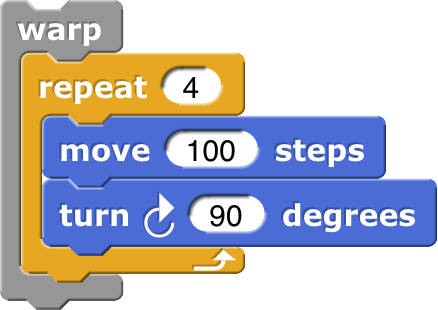 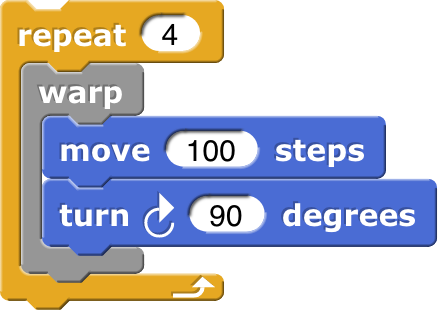 But yeah, I guess if you want to prevent some other script from eating a lot of time without ever yielding, you could write something like @donotforgetmycode_sn's code, although I think it makes the assumption that a script just has one "main loop"; if you're in a situation like this, you know which other script is slowing you down, and you can just manually stop that one.

EDIT: Right, that WARP won't really do anything in this simple example of drawing a square, but if there's an inner loop inside it, warping the inner loop but not the outer one will do the trick. I just wanted to use the example from the help screen.

There is a huge difference between those scripts.
Let, for clarity, repeat(60). Then 1st script takes a few ms while the second ~1s.
And this is a main source of the perceived "slowness".
You probably know that Scratch has a much different strategy now.
Only the loops that make the screen "dirty" are yielding to screen refresh.

Probably the best experience for an average user will be with "smooth turbo" with refresh timeout set to 15 - 30 instead of 500ms.

There is a huge difference between those scripts.

Yes, of course; the point of the second one is that I interpret the original post in this thread as asking for the display to update for each line drawn. So "slowness" is what's desired.

P.S. No, I didn't know about Scratch avoiding redisplay if nothing is dirty. But that has to mean more than just what's on the stage; for example the thumbnail sprite pictures in the sprite corral change if a sprite rotates.

no it does not.