Can I make the stamp disappear?

Yes, that's what I meant and was explaining to you (or at least I tried to explain) how the glow-sword's (i.e. your sprite's) 'stampings' - which need to be forever-made (instead of any clones) - are forced to gradually disappear by the forever-made big-size & 98% transparent sprite's stampings.

So, you need to create this big sprite; I usually name it 'overlay' sprite.

So, I need to make a black colored background that is in the front layer and replace the glow-sword's clones with 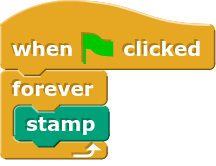 EDIT: It's glow is not turning transparent. ermmmm

Yes. You may additionally want to control the speed of the 'fading' (which is being emulated by the disappearance caused by the big & 98% transparent 'overlay' sprite's - that you called 'background' - stampings).

You can control the fading speed by the wait 0.73 sec block as you did when you were still using clones above. 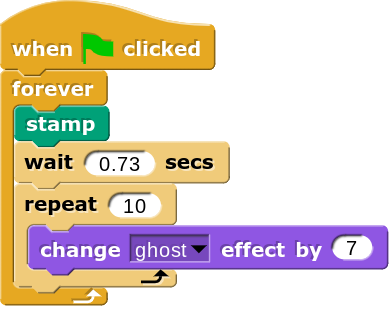 but then it just made the whole sprite slowly disappear, and not the stamps of it (Well the stamps do disappear, but only when the sprite itself disappears, the other stamps that the glow-sword made when it was visible still stay visible).

I'm not good at explaining in words; it is harder then showing

I understand, and thanks. :)

Did I jump too quickly from trying to explain to just showing the remix? I'm sorry...

I admire Brian @bh because he doesn't jump so quickly from patiently trying to explain to just showing...

I guess that I just learn faster when people show me how to do something. But I learn much more slower with typed explanations than most people.

Part 1 of what I wasn't able to explain in words: 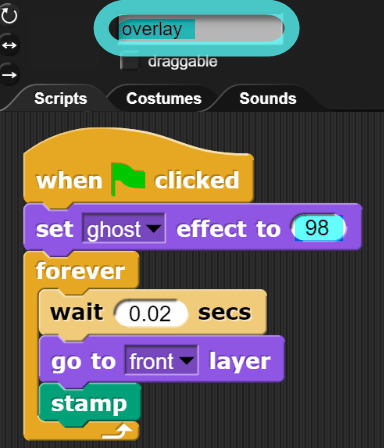 Nice photo editing :)
I now fully understand what you trying to explain in words that I (used to) failed to understand.

I noticed that you - and I bet you are not the only one because you are imo among top 1/3 (its called top 'tercile' by statisticians/data scientists) smartest Snap! users (I'm not saying forum members, but all users of Snap!) - assumed the change ghost effect block influences the stampings's ghost value, as well (and not only the sprite's ghost value).

Maybe the block's help tool tip could explicitly state it that it does not.

you are imo among top 1/3 (its called top 'tercile' by statisticians/data scientists) smartest Snap! users (I'm not saying forum members, but all users of Snap!)

I am...whaaa-
Am I reading things that are not there or did you just say I am one of the smartest Snap! users.....yeah I think i'm....reading things

ignore this if i'm wrong.

You understood correctly. You are a very smart person, don't let anyone tell you anything else!

I am speechless, thanks.

I wrote the way

the way I wrote

You are a very smart person

it does have to do with the computer, but most people don't use super duper fast computers. Snap also lags more than scratch with a lot of clones.