Why won't you make it yourself?

Ok, I made it, and it's pretty simple: 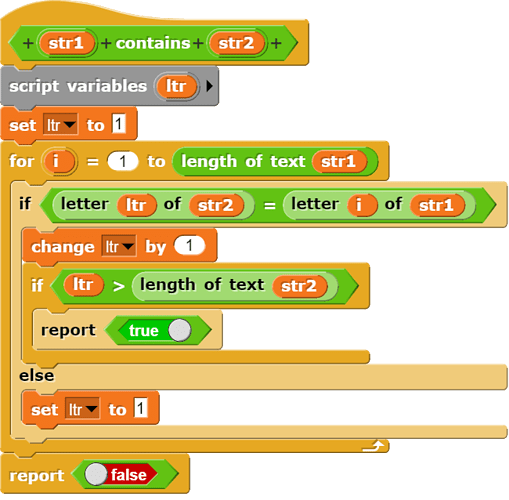 I've made this block before, CONTAINS block for text strings that's my simplest version, but the block is in the strings, multiline input library.

lol, you should've seen my second attempt (the first was case sensitive, but the second wasn't)

The library version uses the JS primive. It's doable entirely in Snap!, but doing it right requires two nested loops, one of which finds a matching first letter and the inner one then checks for the rest of the desired substring.

And that's the answer to the original request. Look for [scratchblocks]< text [] contains [ ] ::operators>[/scratchblocks] in the "Strings, Multiline inputs" library

What about converting, using snapinator, a project that uses []contains[] and see what happens?

It causes it to turn into a gray block that says something like
"UNSUPPORTED: operators_contains"

I haven't checked the lib, or anyone elses' libraries but heres a super simple one.

that does kind of work, but it's case sensitive, so

Just use .toLowerCase() to both and ur good with in-- case sensitivity

yeah, that's literally what I came up with (I just checked)