... which isn't what SCRIPT VARIABLES does.

.. which isn't what SCRIPT VARIABLES does.

Make a for-this-sprite-only variable in the parent sprite, and all the children will inherit it.

That's what I'm doing in my second post. Sorry if it wasn't very clear.

Oops, sorry, I was answering your first post in parallel with you writing the second one.

From what you report, my guess would be that the clones are in layer order. Clicking on a sprite moves it to the front layer. Experiment and see if I'm right. :~)

Clicking on a sprite moves it to the front layer. Experiment and see if I'm right. :~)

You are right, but it seems to be backward from what you would expect. Telling a clone to go to the back layer actually moves it to the front of the list of clones.

The last to move is the first in the list of clone because it's on top...

You can number the clones using a variable: 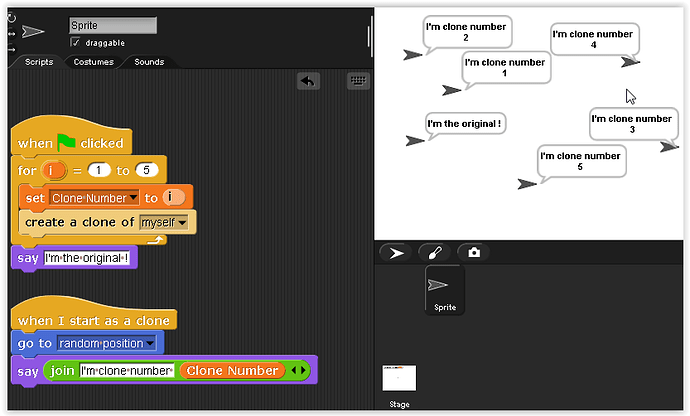 What a brilliantly simple solution

The clones, by default, are numbered in their parent's clone list, so you don't even have to access variables for that:

Nice but @loucheman method is VERY simple - I like simple

But, if you read the entire thread, the whole problem is that the clone list gets reordered sometimes, so you can't rely on it for a stable ID!

Create a sprite-local variable for the ID. You can increment it before/after each create a clone block, or tell my parent to increment it at the top of the when I start as a clone script.

You can number the clones using a variable: [image]

Am I the only one around here who reads the entire thread before replying? :~/

No, I do, too. (I try to make sure nobody else says something before I say it, but sometimes I miss something.)

I do (which is why I haven't said anything before)

@snapenilk @ego-lay_atman-bay Okay, sorry, I was feeling exasperated probably for reasons unrelated to the forum. (Such as the fact that in Alameda County they're still just doing age 75+ even though California is allowing 65+.) (Among other issues...)

It is what Joan said two, no, it's already three months ago, at GitHub - see the link below.

It's the vaccination plans that you are talking about, aren't you?

I can empathize with you.

I can hardly wait to get it myself after my wife (who works in a hospital) has been vaccinated with the second dose of the Pfizer/BioNTech vaccine, already, with a slight fatigue as the only side-effect.

But I will probably have to wait until summer because I am not a priority.

It seems to me that the MY CLONES block eliminates the need for workarounds.

Hm, wasn't the OP's problem with the block

that the list it reported was reordered each time one of the clones was clicked on?

Eh. Just capture it once and store it in a variable.