I said that before I actually made it, and I think I could make it a lot better now.

i know just that can be in the when hat block

then why did you tell me to use that project, I knew about that project after I created mine.

I have a workaround: 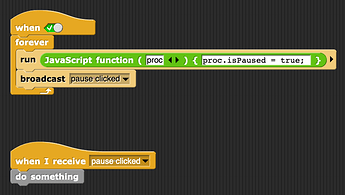 also, I think the atan2 workaround should be removed, since we already have this block.

that workaround was probably posted before they added that

Hi, I still think like there should be a way to have custom "Head" Block as well and also "Close" block.

Hi, I still think like there should be a way to have custom "Head" Block as well and also "Close" block.

Channeling Jens: The fact that something is arguably a natural extension of an existing feature isn't enough of an argument for us to implement it; we have to be shown that you have an actual use case -- something you can't do with the existing mechanisms. Cap blocks, for example, are just a piece of syntactic sugar; they don't let you do anything you can't do with a stack block.

(He says that to me all the time, because I too like to see formal completeness. But, time is short, and our task list is long.)

(He says that to me all the time, because I too like to see formal completeness. But, time is short, and our task list is long.)

I need to agree on this, yeah time is short, but what are the things you need to implement?

Hmm, but discussing about the feature that's going to be added is better, and I feel like it's better to discuss the pros and cons of the feature they're going to implement and asking community whether they like to see the newer feature getting implemented. And maybe I could help them by code too.

This isn't a democracy

And its not even a benevolent dictatorship

Jens does what he likes and SOMETIMES listens to Brian

As Brian says - stuff like this would be great to make Snap! formally complete but there are a lot of other, more day to day features that would make Snap! better/more accessible/useful

We can have discussions on a particular point - this is great of course, but having a discussion on what the priority/task list is wouldn't be productive because the community is so diverse.

The team know what everyone wants - they also know what they want and it'll get done as and when time permits.

And maybe I could help them by code too.

Jens does what he likes and SOMETIMES listens to Brian

No, that's only partly true. He tries hard to solve users' problems, when there's a real problem, such as projects disappearing. Sometimes the underlying problem is political rather than technical, but gives rise to technical requirements; right now what's at the top of our list is that school districts have to have us sign contracts in which we guarantee the confidentiality of student data, and right now we can't do that partly for bureaucratic reasons (we can't sign contracts on behalf of the University of California, so we have to negotiate with their lawyers) and partly for technical reasons (we can't allow student's class projects to be published, and right now we have no way to distinguish those).

That's not to start a discussion; I promise, we know what we need to do. It's just to (partly) answer the question about what's on the list.

(And there isn't really a "the list"; there's Jens's list and my list, and they're different. And no, those aren't up for discussion, as @cymplecy says.)

P.S. But that doesn't mean not to make feature requests. It's especially useful if you show us the project that you can't finish because of a missing feature.

here is how to make the

Thank you.
(I wrote too soon)

Oh, it gets broken with the stage scale. I'll work on it some other time.