I just find it annoying how the stage doesn't have a type.

The type of the stage is "stage" internally; it just isn't in the pulldown menu. (There's a TYPE OF reporter that you get in dev mode.) The really annoying one is that the type of costume 0 is "nothing," not "costume," which is a misfeature. Thanks.

is True. Why isn't that in the menu?

It's an oversight. Will be fixed eventually. Thanks.

I've found out recently that, although the <is [] a [ v]> block only has 10 options, there are actually 13 Snap types (nothing, number, text, Boolean, list, sprite, costume, sound, command, reporter, predicate, stage, undefined).
These all return True: 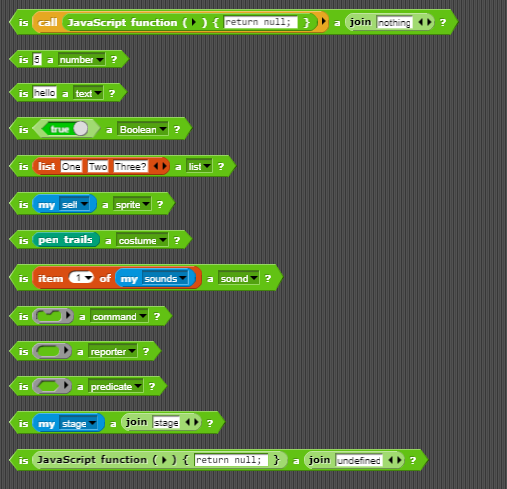 The only problem I have is that in the Snap help dialogue, it says that "every possible Snap value has exactly one of these types", which is not true for stages, undefineds and nothings.

Sigh. I'll give you "stage" as a type that IS _ A _ should recognize. The other two strike me as errors. The first one, that "returns a nothing," should throw an error (JS Function didn't output to CALL, as we said in the Logo days). The "undefined" one should say "Reporter," shouldn't it?

I agree with the first post, but I would call a JS function a command, because a reporter can only be one line.

I would call a JS function a command, because a reporter can only be one line. 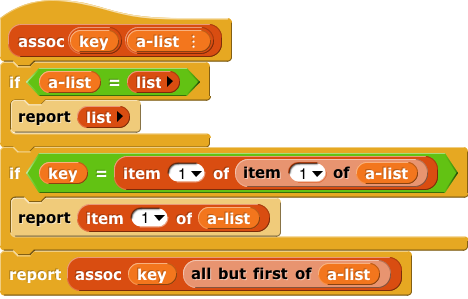 I think you're thinking of Python.

Commands report values if they have a return block in them. Also, JSfunctions do not need to report.
Isn't the reporter type the ring though?

JS Function itself is a reporter; it reports a procedure (a block, but anonymous). The Javascript code can be a command or a reporter, depending on whether it has a RETURN.

Commands report values if they have a return block in them.

I'm not sure what this means. If a procedure reports a value, then by definition it's a reporter.

Hi bh... was wondering if you had any insight on the error "Load Failed: Type error: cannot read property..." error that's affecting several users lately. Michael Ball was able to recover from backup in at least one case, but it seems to be a recurring problem.

Hi. Are you using a version of Chrome older than v.78? There was a Chrome bug for a while that caused some of these problems.

I was--on the Chromebook I was using it had v76. Is it still possible to fix it?

Also, I looked for a recoverable older version but didn't find one. Dunno what Michael did; he'll log in eventually. (Yeah, I read the part about tomorrow. If we can recover an old version, we can tell your teacher when it was saved.)

Alright, thanks so much for trying! Hopefully you guys can find something.

Also, sorry for spamming y'all a while ago, I was sort of panicking at the time.

I was--on the Chromebook I was using it had v76. Is it still possible to fix it?

Sometimes Michael works miracles. Sorry for the panic. We hate when people lose work. I'd say "complain to Google" but they did fix it when we complained, albeit slowly.