Yes it does. However, it can only run for one frame

no it didn't work

You can also do

Isn't the stop button for stopping projects, like in scratch? i don't see any real reason to support this

elaborate on how this would help plz

How to get the red square?

if the project has a generic WHEN block in it, the red square will appear automatically when you press the stop button

This does not work for me. Project: https://snap.berkeley.edu/snap/snap.html#present:Username=donotforgetmycode_snap&ProjectName=stop%20bug

It worked in an earlier version. I know how to fix it, modify the "when ⚑ clicked" script in "Sprite" for that project: 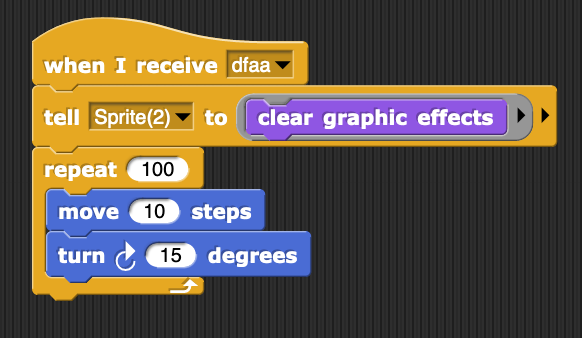 That doesn't work either

okay, now modify this other script to the following:

oh, I forgot to tell you: delete the

thanks. now it sort of works, but you need to click the stop button twice. is there any way to fix that?

no, because of the when <> hat block rule.