In the before times, I used to use dropdown menus in custom blocks using JavaScript menus derived from Snap! lists

Could we have some sort of facility to do this again without requiring JavaScript please?

I'd like this, but I do have a question: How would this be implemented?

That would be up to Jens

So I have this simple menu

that is produced by editing options of the menu variable

If you use JavaScript code instead of the fixed text, then you can access a Snap! list instead and then generate the menu from that 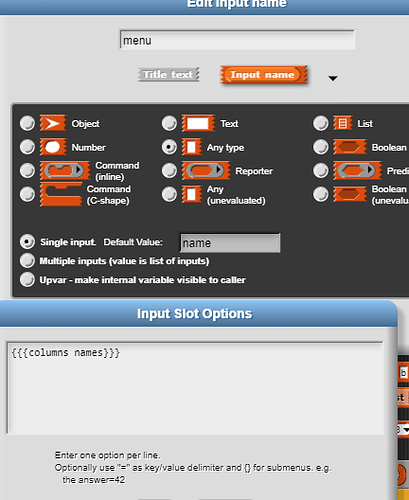 FYI See this thread of what I used to do in the old days
Dropdown menus via list variables - #30 by ego-lay_atman-bay.

It would be nice, but it would still not be something that I'd expect in vanilla snap.

Does this meet your needs?

Does that meet your need? Or, in other words, will the user make the selection while running a project? Or does the user/programmer program a choice into the project? In the latter case, this isn't quite good enough. But I'm guessing that once this is thoroughly tested and released, it'll only be incrementally harder for Jens to use the same code for menu-based formal parameters. (Supposing he's okay with the blue rounded boxes around the menus.) (And that's just a guess. :~) )

No. But I am looking forward to using that in my Mayflower MAS400 project to replace my own custom stage menus

I'm talking about editing dropdowns , like what I made for you for your crayons lib