The memory is acting up

If the project generates lots of data in variable, especially large lists or costumes or sounds then that adds to the project size

Have you looked at the project? I don't have any large variables or costumes, and I delete all the sounds before I save it. 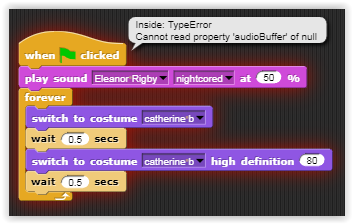 You need to import your own sound and then try the blocks on that. I was testing it on Eleanor Rigby, but I had to delete it to save it.

What music? There is no music saved in the project.

i understand, but are you sure you don't save the music with the project when you save it ?

do you store your music into a variable ?

No, I make it add it to my music directly, I don't store it anywhere besides for my sounds. I use reporter blocks to temporarily get music, then I could use one of two blocks to add it to my sounds.

Ah! That must be it! Thank you.

When you run it, the variable contains the last sound so if transient is not checked the sound is save with the code...