Suggest a new function for deletion of custom blocks

That it would be called:
Delete all excess custom definitions

Isn't that what Unused blocks... does? 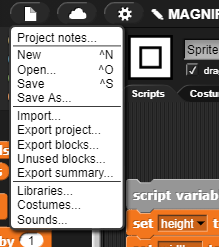 Unused blocks certainly exclude blocks used in other custom definitions... but, of course, if these "other custom blocks" are used! If not, both are "unused".

The only times I've been dissatisfied with its choice of blocks to delete turned out to be when I had leftover random bits of no-longer-used scripts lying around in the scripting area after a debugging session. Those blocks are considered to be in use. You could imagine having a "delete hatless scripts" option in "clean up," but that'd be a little dangerous. Maybe "delete hatless one-liners"? But now it's starting to sound like a kludge...

What I'd prefer (instead of deleting them, which may be too radical), is having an option to automatically fade (i. e. darken) every "hatless script". That way they'd be seen more clearly as good candidates for a manual deletion.

Nah, if I'm going to navigate around the scripting area to see a visual indicator, then I don't need the indicator. The ones that are problematic are down past three screenfuls of empty space because a big script was previously deleted, or, worse, the ones that are behind another script that I moved around carelessly. Imho.