Stream of approximations of ϕ

Nice. Are you doing the exercises in SICP or something?

Nope! I just remembered that ϕ=1+1/ϕ and made a stream of that with more and more terms.

Cool. Nice having a mathematician around. :~)

A mathematician that likes math.

A mathematician that likes math.

Is there another kind?

Mathematicians that don't like math, but rather are forced to use it?

Will it converge to the golden ratio no matter what starting value you give it?
(wrong reply, I meant to reply to the first message)

If I'm not mistaken, yes it does.

Mathematicians that don't like math, but rather are forced to use it?

Such a person is not a mathematician. They might be an engineer, or an accountant, or a student. To be a mathematician, you have to consider ei𝜋+1=0 the most beautiful thing in the world. 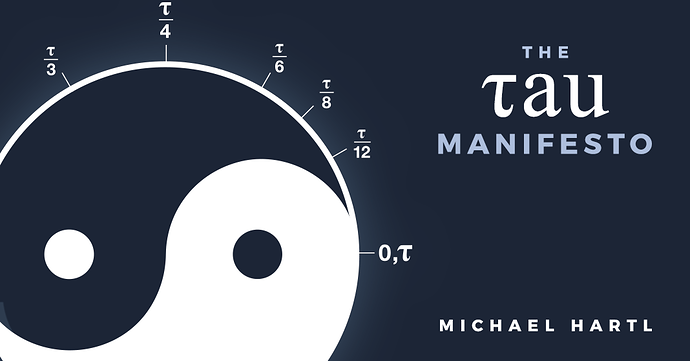 No, really, pi is wrong: The Tau Manifesto

For millennia, the circle has been considered the most perfect of shapes, and the circle constant π captured the geometry of the circle in a single number. But π is wrong, and it’s time to set things right.

Grr, you made me spend two hours in a rabbit hole. Interesting argument. (Except for the puns.) But today is 𝜋 Day; maybe on 6/28 I'll be more receptive. :~)

Tau Day | No, really, pi is wrong: The Tau Manifesto by Michael Hartl

In fact, I had a $$\pi$$ pie and stayed up the whole night watching videos.

Your way is fine, but people usually present it the other way so as to have the five fundamental mathematical constants (including additive and multiplicative identity elements) in one equation.

The shape, or the value itself?

Neither. It's a nice letter, and I have nothing against it being $$2\pi$$; I just don't like it being used as the main circle constant.