SPOILERS AHEAD... when i try to continue in the game the character wont pop up after the car breaks down and i dont know why. can some one please help me on this link:Snap! Build Your Own Blocks

The reason why is because the "PlayerinCar" boolean is still true, which means the player is still in the car. Set it to false on the Player's Script.

Actually, there are more problems than that. Let me try to pinpoint them.

however, since this script 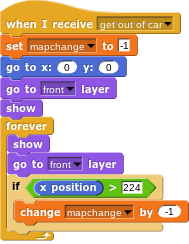 doesn't turn the "PlayerInCar?" boolean to false, and so the player won't get ejected out of the car.

Here is a solution:
https://snap.berkeley.edu/project?user=slate%20technologies&project=Car%20Horror%20Game%20TEST%201
I'll let you do the rest. That is the best I can do.

untitled script pic (5)272×685 146 KB
closer to the bottom of the script it sets the playerincar boolean to true as long as the player is touching the car but if i move this script then it automatically makes the car disappear at the beginning of the game
EDIT: i saved my edit so the game should be updated as of now for a bit
system closed February 20, 2022, 8:47pm #7