Interesting talk, and the demo was super cool! Thanks @jens.

Oh is it online now? Same YouTube URL as the streaming?

For some reason, a "shown?" block was added into an "if <> then" block when I used the Snapinator. It even added an "and" block to fit it in there. Why?

The shown? is there to replicate Scratch's behavior.

Snap already has a TTS library.

People have mentioned that several times. It doesn't support all the voices that Scratch does.

it depends on the browser, well, in snap.

here is my solution:

Unfortunately Scratch handles types differently when stringifying a list than in every other context. So while that's nice and intuitive, that won't always behave the same as Scratch.

Usually, Scratch and Snap! consider both the JS number 0 and the JS string "0" to be equivalent. However, when stringifying a list, 0 and "0" are treated differently. Unlike Scratch, Snap! consistently treats the two as equal numbers, so there's no way to detect the difference between them without the JS function block.

Just ignore JS. Assume that any one digit string is not a number. That is the only place I have used stringify list used in scratch.

Yeah, that's what I'm leaning toward doing, at least as the default behavior.

I made a pull request on GitHub for support of the Scratch 3.0 list index of block. I was wondering if you at least noticed it?

Oh, yes, I saw it. It's nearing the end of the semester, so I'm currently drowning in schoolwork (more so than usual). I'll review it and start to incorporate the blocks from this thread when I have more time in a week or two.

I am working on some of the text2speech blocks using google cloud, google text to speech and google translate. 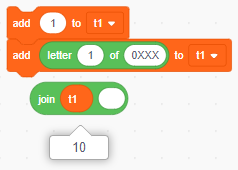 It seems that the list containing only digits, even "0", in Scratch, is joined as letters.
So this

can be used to choose between "join" and "join words" in Snap!

String operations and generic round inputs give the JS string "0" 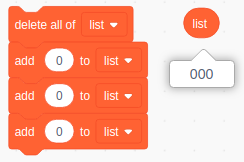 Math operations give the JS number 0 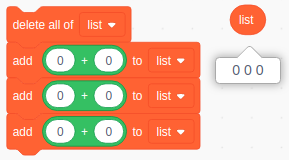 They look and behave identically except for the list behavior.

@elliott47732 and @ego-lay_atman-bay made a nice version of Scratch's translate block.

So now the main missing features now are Scratch-style text-to-speech and the instruments.