I made a block that reverses a finite stream: 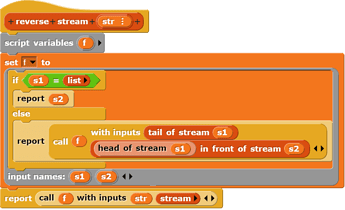 untitled script pic884×540 72.1 KB
They are kinda like Scheme lists, I just converted car with head of stream and cdr with tail of stream and cons with in front of stream

Anyway I put the NUMBERS FROM stream block as the parameter and it froze. I concluded that it would stay this way forever because there would always be a stream tail.

So the reason you can't reverse an infinite stream isn't a bug in your code. It's that the whole idea is incoherent.

Since you can't do that, think about how to generate the stream of all the positive rational numbers (ratios of two positive integers). It's a really hard problem, solved around 1900 by Georg [sic] Cantor.

You've either missed Brian's point (or I've missed a joke)

Both.I did miss his point and I putted a joke for Number.MAX_SAFE_INTEGER is not Infinity

No, but they had numbers. Cantor invented set theory, which has to do with measuring the size of sets, and in particular the size of infinite sets. If I lose you in the following, tell me where.

Okay, that's straightforward for finite sets. But infinite sets can be put in one-to-one correspondence with proper subsets of themselves. ("Proper" means not the set itself.) In fact, this is the definition of an infinite set.

So, for example, let A be the set of positive integers, and let B be the set of even positive integers. So, clearly B is a proper subset of A. But they can be placed in one-to-one correspondence as follows: Pair up the number n from set A with the number 2n in set B. Every number in A is included in this pairing, and so is every number m in set B, because it can be paired with m/2 in set A. (m/2 is an integer because every number in set B is even.)

Note: Don't be misled by the even integers example into thinking that the correspondence between two sets of numbers has to follow the size ordering of the numbers. For example, here's how to put the positive integers in one-to-one correspondence with the set of all the integers: You rearrange the integers this way:

and then you can line them up with the positive integers.

Now for the exciting part. By this time, Cantor had pretty much convinced himself that all infinite sets would turn out to be the same size, "infinity." But then he proved that the set of real numbers is bigger than the integers!

So, I claim this fraction we just constructed isn't in the list. Because if it is in the list, it has to be paired with some positive integer n. But the fraction that's paired with n isn't this fraction, because they differ in the nth digit. (Maybe other digits too, but for sure in that digit.) So this decimal fraction isn't in the list, so we can't make a one-to-one correspondence between the positive integers and the real numbers in (0,1), so the reals are bigger than the integers!

Isn't that fantastic? That we can prove such a thing? Cantor himself remarked, "I proved it, but I don't believe it," because it was so counterintuitive that all infinite sets aren't the same size. I was wrong about this; what he said that about was that C²=C.

The numbers that are the sizes of infinite sets are called "transfinite cardinal numbers." (There are also "transfinite ordinal numbers," which have to do with the natural ordering of sets, but they're way more complicated.) The size of the integers is represented as ℵ₀, pronounced "aleph null," and the size of the reals is C, for "continuum" because the reals are continuous on the number line. A set the same size as the integers (or smaller, i.e., finite) is called "countable." So, you can make streams of countable sets.

So, why isn't the size of the reals called ℵ₁? Because Cantor couldn't determine whether there are any infinite sets larger than the integers but smaller than the reals. That question was unsettled until I was in high school, so early '60s, when one day I picked up my copy of the New York Times (I subscribed through the school), and on the front page of the second section was a half-page article saying that someone had just proved that the question C≟ℵ₁ is undecidable, i.e., the axioms of set theory are consistent with either of C=ℵ₁ and C≠ℵ₁. That was the most exciting day of my time in high school.

So, I claim this fraction we just constructed isn't in the list. Because if it is in the list, it has to be paired with some positive integer n. But the fraction that's paired with n isn't this fraction, because they differ in the nth digit. (Maybe other digits too, but for sure in that digit.)

How does that mean it can't be paired with an integer? Can't you just get a new integer? If the set of integers is infinite, then you should always be able to get a new integer, right? I remember I watched a video that explained this long ago, it was on YouTube made by a guy named Vsauce. Somehow those videos are entertaining. except i forgot most of what the video said

Note: Don't be misled by the even integers example into thinking that the correspondence between two sets of numbers has to follow the size ordering of the numbers. For example, here's how to put the positive integers in one-to-one correspondence with the set of all the integers: You rearrange the integers this way:

and then you can line them up with the positive integers.

Starting with the easy question: When we made the 1-1 correspondence between the positive integers and the positive even integers, the pairing went like this:

and so on. As you read down the page (I made it vertical just to avoid issues about variable spacing making the pairing hard to see), the even ints are in size order, 2<4<6<8 etc. But for the positive integers vs. the integers, it's

How does that mean it can't be paired with an integer? Can't you just get a new integer?

Good question! But no. We have supposedly already paired all the +ints with all the reals in (0,1). That's why we were able to make the (hypothetical) claim that the reals are the same size as the integers. So we shouldn't be able to find another real number not in the list. Even if you cons that number onto the front of the list (not the end of the list because it has no end), you now have a new list of supposedly all the reals, and we can still construct a number that isn't in the list, the same way.

Pair all as many reals as we can with positive odd ints. Construct a new real and put it in idx 2. Construct another new real and put it in idx 4... Is there a problem or contradiction there that I don't see?
EDIT: Brian came up with a good point. My original wording implies that every possible real is still in the list, but I'm thinking that changing the wording doesn't change the math. That makes sense: if it's done infinitely, we can do it again with all of them (the original odd-indexed ones and the filled-in even-indexed ones).

But the flaw in your reasoning is this: By hypothesis, we've put all the reals in that list! So you shouldn't even be able to construct one "new" real, let alone infinitely many of them. Any putative sequence (a 1-1 mapping between something and the +ints) containing all the reals is provably incomplete.

You guys might want to skim https://en.wikipedia.org/wiki/Georg_Cantor. Like all Wikipedia math articles, it's unreadable, but if you accept that, you can still get a lot out of it. @snapenilk may find its discussion of the theological implications of set theory interesting.

(See, this is how I want to spend my time on the forum!)

One more idea (that probably won't work, but I think it's good to think about): start as I have previously described (with the wording of "as many as we can" instead of "all" so that the hypothesis is not contradicted), but instead of filling in every even index, fill in every other index so that there are still spaces remaining. What would happen if the infinite-step-filling algorithm was done an infinite number of times? I think somehow some reals will be skipped over, but I think they have to be because there's not a 1-1 correlation between the continuum and the discrete set.

Terminating decimals are a subset of the rational numbers, so, not a continuum. There's only one way to fill up a number line without any holes, and that's the real numbers. Other continua are things like higher-dimension spaces such as the complex plane.

No matter how you fill in the spaces in a list, the set of everything in the list still has to be the same size as the +ints! That's because the item numbers in the list are integers. And no matter what technique you use to fill up the spaces, you still won't have all the reals when you're done, by Cantor's proof with the digits, above. (This proof technique has a name: diagonalization.)

By the way, in case this wasn't clear, a set of size C is not necessarily a continuum. Consider the irrational numbers. That's a set of size C, but it has infinitely many holes where the rationals go.