If you want to make an additional remix of this project, originally made by cornelios207, here are three challenges.

EDIT: The hard challenge is an extension of the medium one.

Decided to just do the easy challenge - because the other ones make me lost eheh.
Here, hope I did it right.

Thank you for sharing your remix. You did a wonderful job.

@sqoosh would you be so kind to edit your post so that the iframe's height will be matching the project's stage height (which is not the default value, but a bit higher, 560)? The reason I'm asking it is because now the lost proportions are causing the variable watchers to be overcrowded in the iframe. 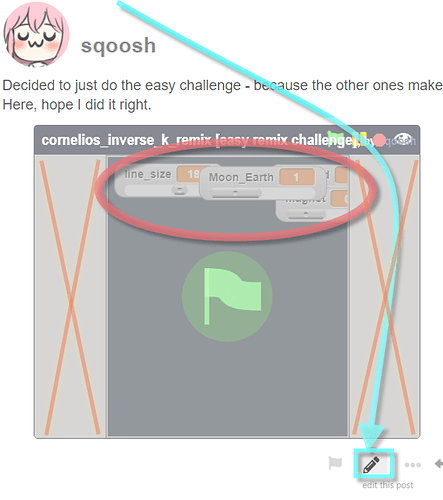 Another tip: Too much space is taken by title and author's name (and I like long descriptive titles), so you can not click on green flag, pause and stop buttons or on 'eye' icon, as they get overwritten - so, to prevent this, the '&showAuthor=true' portion needs to be deleted (as shown in the details at the bottom of this post).

See how the variable watchers aren't as crammed as before and it is possible now to click on both small, yellow pause and red stop, buttons (the small green flag icon being overwritten isn't problem since you can click on the big encircled green flag, instead), as well as on 'eye' icon.

In the details below the parts that need to be edited have been bolded.

Seeking advice
"Twenty Things to Do with a Computer" Revisited
kinestheticlearning December 23, 2021, 4:11pm #7

But the question, which still doesn't have a solution, is the following one: how to keep the distances between vertices equal even when the 'k'-th clone of vertex is being pulled towards the anchor?

I think I finished the hard challenge. It was a bit confusing though.

It looks like the webpage at https://snap.berkeley.edu/embed?project=cornelios_inverse_k_remix_hard&user=spaceelephant&showTitle=true&showAuthor=true&editButton=true&pauseButton=true might be having issues, or it may have moved permanently to a new web add...

Edit: Other embeds aren't working for me either.

Thank you for trying, @spaceelephant . The hard challenge is, however, an extension of the medium one; I'm so sorry I haven't clearly stated this in the description of the hard one (I have retracted it until we solve the medium one).

how to keep the distances between vertices equal even when the 'k'-th clone of vertex is being pulled towards the anchor?

In other words, each segment should be equally long. But it isn't and I don't know why. See the screenshot. 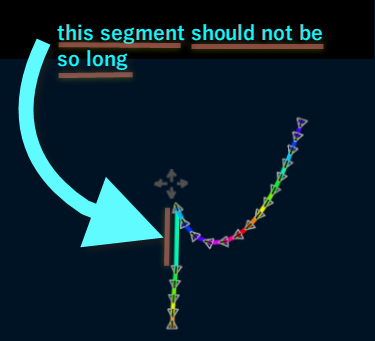