Question about "my [scripts]" future thing

This is more of a question if the "my [scripts]" could change. I would put it on feature requests but macros were just released a second ago.

What if the scripts in the "my [scripts]" reporter were identical to the "this script" block for each of said scripts.

would instead be this:

No. That would mean that the list would change for every (this script) block. My scripts should be the order they are in, in the editor.

Also, using identical shouldn't be used to compare scripts, because it checks if it's the exact same object. So this doesn't work

I was asking if each script was identical to the this script block. So that the two actually were one in the same, since the (my [scripts]) just creates a new list every time.

oh yeah, I used the item block just as an example

Apparently each call to THIS SCRIPT reports a new object, but they are equal according to =. Is that good enough for your purposes?

I'm just a little confused as to why this doesn't work 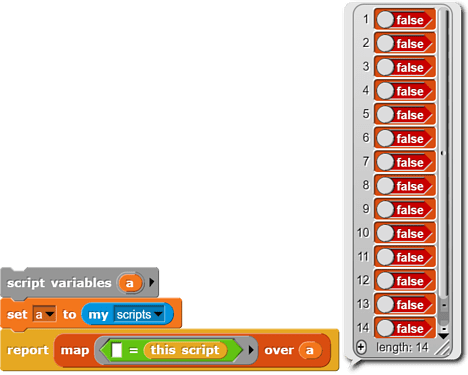 I think I know why.

(this script) is equal to the procedure inside the map block. You're asking it for something it doesn't have.

Now that I think about it, it makes sense. This script is in a ring that is being called.

Yeah. It gives you the innermost procedure (or toplevel script if there are no intervening rings).