Primitive "var_get(name)" is confused and thinks "c:/" is a script variable 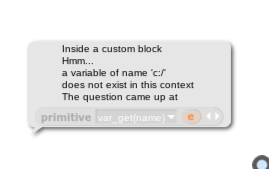 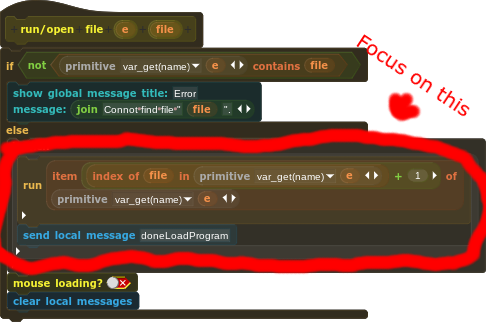 It would help us i you gave a link to the project o we can then debug it.

I think that may have something to do with the way @jens implemented the new error messages, you know, changing the word "Error" to "Hmmm..."

Ya know I would love to but as I am currently IP banned, I cant.
Breh I forgot to export the project and I was going to give you the XML, but I need to remake it first, give me like 5 minutes

I think that may have something to do with the way @jens implemented the new error messages, you know, changing the word "Error" to "Hmmm..."

I thought he just made all of the error messages to say "hmm..." instead of "error" at the top.
So in the source code, all of the errors will have "error" in the message? But it will still come up as "hmm..."?

Okay so remaking the script I found an error. The "launch" block makes every variable with the "get var" primitive in it makes it think it variable fake script var doesnt not exist and not global variable, hence, an error saying "var no exist in context"

That's why it's better to input a variable in a ring instead of just text. It's much more reliable.

Edit: Uh I dont even know what just happened. My brain did not want to connect to my fingers.