There are several figures in the Snap! Costume Library, like Avery, that can be used to create animated sequences of walking, etc.

We would like to do something similar with figures with arms and legs that can be moved to fine tune the animation. Does anyone know of a source for such poseable figures? (In other words, if the arms and legs of the Avery costume could be rotated and adjusted, this would provide the capability that we're seeking.) 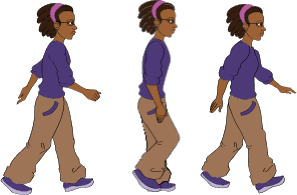 We identified some articulated cardstock animals from 1919 that we think may have potential. 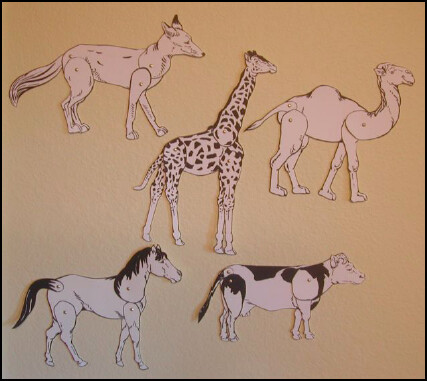 Real cartoonists use 3D modeling software to model their characters and create poses from the models. I suspect the Scratch Team has a 3D model of Avery from which the costumes are based. That exhausts my knowledge on the subject; ask a 12-year-old how to do it and what software to use.

Some animation is done entirely in 2d. Even using the type that @glenbull is talking about. I've seen users on scratch make the different parts of a character in separate sprites/costumes, and then animate them by putting all the parts together using code. This can probably be done easier in snap, because you can set a sprite as an anchor, and change the rotation point.

Oh, yes, you can even carefully take apart existing costumes to make their limbs articulate, like the example with Alonzo's green arm in the manual. The trouble with nested sprites is that they're too flexible, so you can give them poses that a real body either can't do or, more subtly, just wouldn't do as part of a walk sequence. Modeling software knows how bodies work, I believe, so it takes care of such problems.

I guess in part it depends on whether you want the posing of the body to be something your student can take for granted in some larger context, or you want them to learn about body motion as the object of the exercise.