How can I convert it to the same format as you get from the pixels of costume reporter?

Here's what I would do. Convert the 32 bit to hex, then just convert that to rgba. Of course there's probably a much better way to do that though.

Convert the 32 bit to hex, then just convert that to rgba

It's sort of in bytes (but not quite!)

The data length should be exactly 520000 but it looks like some some of the byes are being returned as 16bit values - very strange - I need to work out what's going on!

I'm off out for the evening so I'll have to look at it later!

I see nothing wrong with Chrome@Win10

When I google stuff, there seems to be problems with large arrays using that approach (as shown in my project)

The use of the spread operator ("..."), which simulates calling a proc with zillions of parameters, usually causes a problem.
But it seems that "typed array".toString() is skewed on your platform.
In this case toString() should return text "53,89,137..." without any unicode consideration.

I found this solution and it seems to work 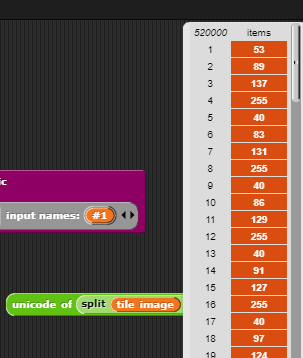 Much neater thank you