Jens tweetet about mapping the element extractor over a list of numbers to get only the items with the index of that number list: https://twitter.com/moenig/status/1241024133388959745

I tried, but I dont reach the pinnacle of human intellectual culture:

Did I miss somehting? Is there a more elegant way to extract list elements by a list of indexes from a list than the one I found? 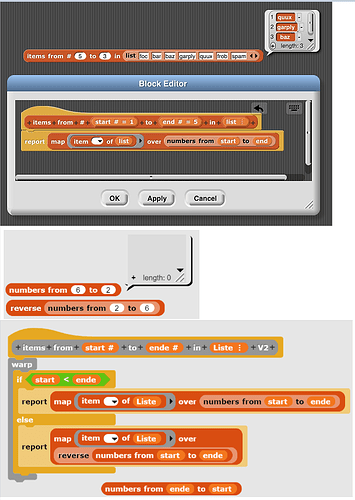 Hi Matthias, could it be that you're using an old version of Snap?

Yes, old like me.....
I will try a new version immediealty.
THANKS!
mk

Now it works. It really was the old local version ...
THANKS!
mk

I know the feeling.

older version of snap must have worked with the Words, Sentences. library. Now half of them give errors when the input box is left empty.

I don't think your examples ever worked in the sense of doing anything useful. In very old versions of Snap!, we didn't catch this error, and so you got whatever Javascript gave you, which may have been an empty list. And then, we treat nonexistent items of a list as empty rather than as errors. The problem with this is that student recursive programs on lists with missing or defective base cases were hard to debug, so we now catch this error even though Jens hates catching errors because the error test slows down even programs without errors.

I know the feeling.

Yeah, but there is value and advantage to age: you treasure the things which are so good that they stay forever.
I just read a few days ago that www.grammarly.com/, a company that interrupts me with ads when watching youtube, runs common lisp to analyse grammar:
(https://www.grammarly.com/blog/engineering/running-lisp-in-production/)

Common LISP!
That is so 80s! But apparently still very live and useful.

Yeah, but there is value and advantage to age: you treasure the things which are so good that they stay forever.

The way I see it, the only silver lining to getting old is you already know most of the things that are relevant to your life, so it doesn't matter so much that you get too stupid to solve new problems. It's the opposite of young people, who don't know anything but are frighteningly smart.

(But it doesn't work for mathematics. They keep inventing new stuff that gives me a headache.)

(And also these days the young people have an unfair advantage because of search engines. So effectively they know everything and are smart.)