Not Exactly Sure what's Going On

I'm not sure what's going on here, if it's a bug or what, but My Brickwall page from the BJC course has this weird Glitch. It may be just my code but I can't see what's Wrong. When I put 0 in for a thickness my Draw B block still has a slight gap that seems to be even less then 1 step but any number greater then 1 seems to work perfectly?

Here is what it looks like with zero Gap 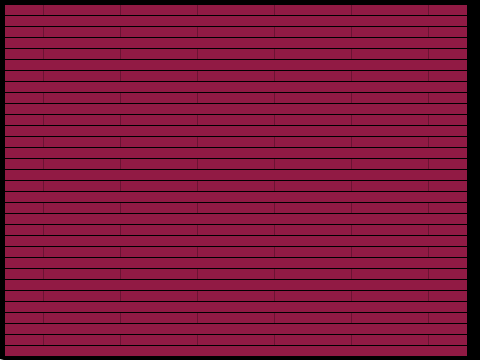 Here is what it's Supposed to look like with zero gap: 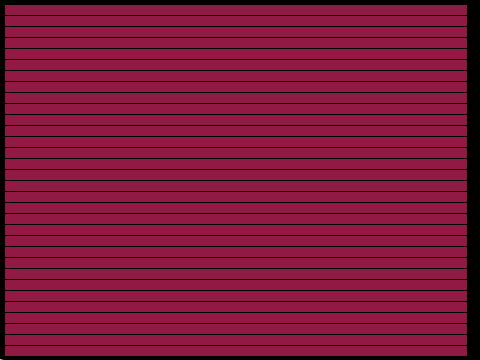 Here is a Link to my Code:

yeah this has been a glitch for a while

I'm not sure I understand. Do you mean, if you change all the MOVE 2 STEPS blocks to MOVE 0 STEPS it doesn't do what you expect?

there's gaps between things that should have no gaps. I've had the same problem for a while here:

there's gaps between things that should have no gaps. 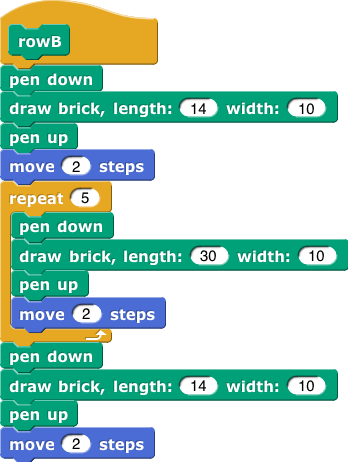 So, I'm not sure what I'm supposed to do to get it to fail.

Exactly, When the move block is set to Zero steps it still seems to move.

But its this block

which is inside of

And as I posted when the steps Are set to Zero or in other words where it says gap Thickness is set to zero it still puts a gap In RowB even though the value of the variable that's in RowB Reads back zero.

Sorry for not specifying which Draw B block, My bad

I was confused because there were innstances of the simple one visible in the scripting area. :~)

This behavior doesn't surprise me. It works the way you expect when brick length is even. When it's odd, you draw an end brick with a length that includes a half-pixel. We remember the exact position of the sprite, but in drawing the line of length 77/2 on the screen, we can only display a whole number of pixels, 38 or 39, and we round up so there won't be visible gaps in polygons.

Thanks for much for this explanation, took me a while to figure out what you were saying but I get it. Again, THANK YOU! It was actually driving me crazy.

I solved my problem in a way that it doesn't make it perfect.. But it makes it look nice, here is the new Block: 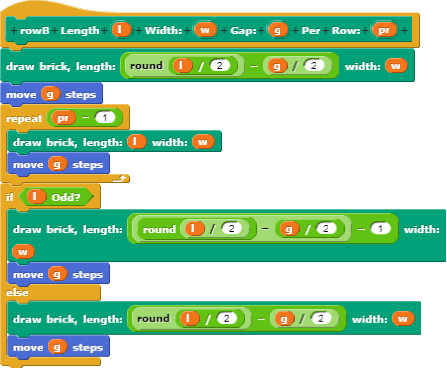 Which simply removes a pixel from the last block in Row: B if the length is ODD