Sprite local variables are very useful for quickly creating and using variables but you can't monitor them easily.
Turns out that that is untrue - read further one

I had fun creating it 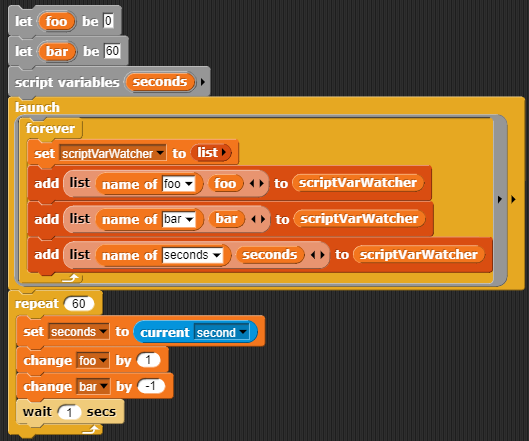 You know you can say

I think your script would be improved by replacing the FOREVER with
REPEAT UNTIL <(script var watcher) = 87>
and then set the variable to 87 at the bottom of the procedure. (Any non-list value would do.)

You know you can say show variable

Never occurred to me

You know you can say

It's not so practical, because every time you run the script it creates a new watcher. And HIDE VARIABLE block doesn't hide these previous run watchers.

Oh, you hide them at the end of the procedure. Or if you do HIDE VARIABLE with the input slot empty, it hides all watchers of temporary variables, even after the procedure has exited.

Having had a little play, I think sticking the empty one at the start of the script might be the one to use the most commonly 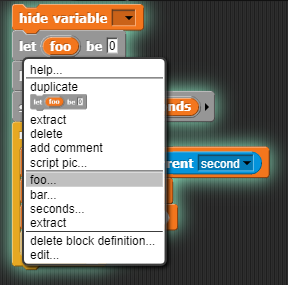 I'm thinking that we need a Tip of the Day category

Or if you do HIDE VARIABLE with the input slot empty, it hides all watchers of temporary variables

Ah, thank you, it's a solution