Make default of make case independent be true instead of false 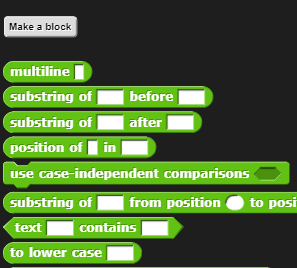 Can it be changed in future versions to default to true to prevent this please?

How I found out
I had a project (that was using position of library reporter) and all going well.

I made a slight change to a very complicated custom reporter and start getting errors.
I spent AGES trying to work out how my little change had caused the error.

I spent a long time disecting the custom reporter to try and work out what I'd done.

At that point, I worked out that I'd somehow switched to case-sensitive mode.

However we set the default, some people won't like it, isn't that so?

Under what circumstances can you imagine that setting it to default to true (which is standard Snap! behaviour) would cause someone a problem?

If anyone wants to switch to case-sensitivity mode, I'd thought that they'd be explicitly setting the block to false and not relying on the current default empty value

[edit]
Having thought about how it would cause anyone a problem, I have come up with if someone wanted to use the current default emptiness inside a mapping HOF, then they might have a problem.

But for those rare occasions, I think this would let them carry on

Oh I see, you're not asking to change the behavior before using this block, just to change what leaving that slot empty means. I guess that'd be okay. I'll look into it...

So, I am asking for the default of the slot to be true

This isn't solely for my benefit BTW

OK next time there's an update...