Hello, I'm trying to create a proof of concept for a snowball rolling game using Snap!
Currently, I can't find a way to calculate the distance needed for the snowball to grow while not overlapping the character sprite.

My project can be viewed at the link below. The controls are in the "Sprite" sprite, and the troublesome code is found in the "Snowball" sprite when the green flag is clicked.

Use BeetleBlocks(or just simply hack openGL and mod it)

So it's a limitation with Snap? There isn't anything I can try in the program to keep it 2D?

Certainly. I'm trying to make sure that as the snowball grows, the player is always behind it, just like real life. The game itself is similar to "Snowball.io" but in 2D, so look at footage of that game if you'd like.

I'm aware I can add the X and Y positions of the sprite, and sin or cos of the player's direction (respectively) to keep the snowball in front of them in an orbit. The problem comes with constantly scaling the radius of its orbit around the player with the snowball's size. I circled a snippet of my code where I think I could put this number once I find the proper way to calculate it. My first formula was the square root of the size, times 2, but that didn't seem to work. 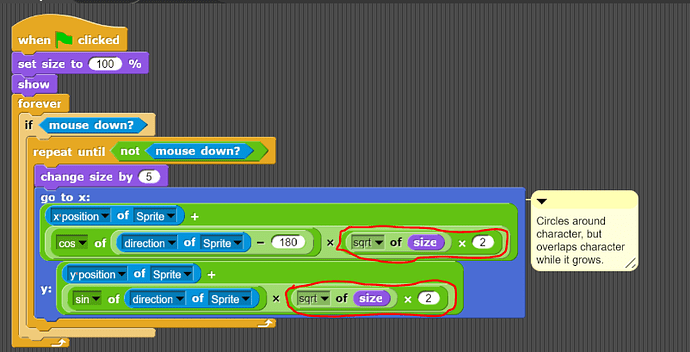 This is not helpful.

That's all! Remember to "reedit" your costume and play with something like this... 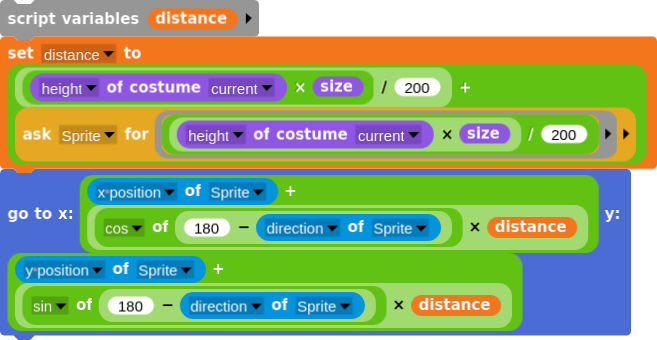 I do not know where to find the game you are talking about what @jguille2 has pointed out good facts and helped you already.

Thank you! This seems to work a lot better. My sprite sizes might have been off due to me giving myself a lot of area in my original art editor. However, when I shrunk it down to its actual size nothing seemed to change. After testing, 200 was still the most consistent number to divide (height of costume) * size by, hopefully this effect won't be as difficult to implement in full-fledged game engines like Unity.

Just for my own clarity, you divide by 200 because, after multiplying by 'size', you've turned the distance value into a percentage. So, the 200 = 2 * 100, where the 100 part turns the value back into an actual distance, and the 2 part divides it in half. Doing this for both sprites puts the distance as half the size of each sprite added together. Right?